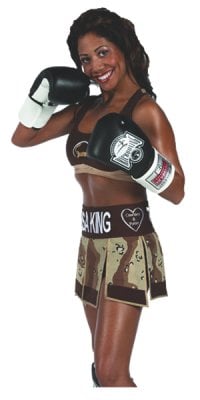 The event will be held at the Saphan Hin Sports Complex on March 10, starting at 5 pm.

Organizers Surasak Mookpradap of NS Sport (Thailand) and Rawat Chindapol, Managing Director of Miss Lily and also developer of the Nirvana Phutri real estate project in Chalong, said the purpose of the female fight night will be to promote Phuket’s continuing post-tsunami recovery.

Also on hand for the special event will be a Hollywood production team shooting scenes for an upcoming film in the Charlie’s Angels series.

The US boxers, who will arrive in Thailand on March 2, include Lisa “The Black Widow” King, Christine Toledo, model Ariana Ramirez and Kourtney McCarty.

The matches will be broadcast live by Thai TV Channel 5 and by NS Sport to 170 countries, the organizers say. Admission is free of charge.