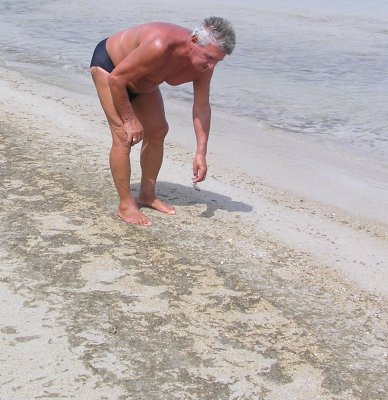 PATONG: Tourists strolling along Patong Beach now have an extra something to remember about their stay in Phuket – a slimy, brown seaweed with a stench to match its looks.

This is not the first time seaweed has invaded the Patong shore. Two years ago bright green seaweed covered the sand (See story here). This year, however, the seaweed is brown.

Marine biologist Nipawan Bussarawit, from the Phuket Marine Biological Center (PMBC), said that she was first told about the seaweed nearly three weeks ago. “We took water samples for testing, and the water quality was okay,” she said, adding that PMBC staff also collected samples of the seaweed.

“However, we’re not sure whether the seaweed there now is the same as the one that was being washed ashore three weeks ago. The seaweed that appeared about February 5 was Cladophora. It’s a green seaweed but it turns brown when dries,” K. Nipawan said.

“Patong Municipality cleaned up [the Cladophora], but it seems it has come back,” she added.

Jet-ski operator Weerapan Choosangjan said, “It doesn’t look the same as the green seaweed that we saw a couple of years ago, this one looks like moss or algae. The color is brown, and it’s darker than normal seaweed. And it stinks.”

K. Weerapan said that tourists had complained that Patong Beach now looks like Pattaya when it had “dirty” water. “They are saying that if it continues to be dirty like this they will not come back next year, and now many tourists don’t want to go swimming because of this dirty stuff, and the water is starting to smell bad.

“You can’t see it clearly from the beach, but you can see the dark shadows under the water. When you touch it, it feels slimy,” he added.

English tourist Jenny Sherwin, relaxing on the beach this morning, said that this was the first time she had seen something like this. “I have been to Phuket six or seven times, but I have never seen anything like this before. It’s not very nice.”

Masseuse Somchart Taosarn, 38, who has been working on Patong Beach for the past five years,

told the Gazette, “I first saw it at the north end of the beach at the beginning of February and it has been here for about two weeks.

“Tourists say it stinks but they still sit on the beach. But they don’t swim near the shore. Instead, they swim further out in deeper water,” she said.

K. Somchart said that every morning for about an hour, Patong Municipality workers scour the beach picking up the seaweed.

“But there’s so much, and the cleaners stop work when the tourists start arriving at the beach, so more seaweed washes ashore after they’ve left,” she explained.