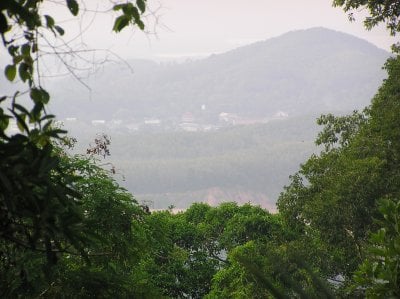 PHUKET: Hazy atmospheric conditions in Phuket today are the result of forest fires on the Indonesian Island of Sumatra that have left much of Malaysia and Southern Thailand coughing in smoke over the past week.

Chumnong Chitpukdee, chief of the Meteorological Department’s Southern Meteorological Center (West Coast), confirmed that Sumatra is the source of the haze, which is being carried here across the Strait of Malacca by prevailing southwest monsoon winds.

“The haze made it as far north as Trang yesterday and today it reached Phuket,” he said.

K. Chumnong said that the concentration of smoke particles in the air was not high enough to pose a health risk and the sky should clear up considerably with the next rainfall, which he said he expects “soon”.

The haze poses no great risk to aviation, he added. “Fortunately, visibility is still good at the airport because of steady winds coming off the sea,” he said.