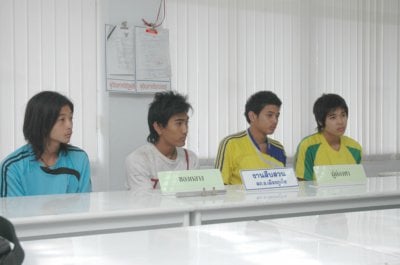 PHUKET: A birthday party at a restaurant near Soi Pisanu in Village 1, Wichit, turned deadly in the early hours of Sunday, when an 18-year-old girl was shot dead during a petty squabble.

Phuket Deputy Police Commander Col Chalit Tinthanee told reporters that Jutarat Naksri, a student at Phuket Technology College, had been out drinking at the restaurant to celebrate a birthday with a group of about 10 friends.

About 3:30 am, four youths on two motorcycles pulled up outside the restaurant and approached the group.

One of the youths, Natee Kosonsorawit, 21, approached his girlfriend, who was among the group, asking her return home with him.

The girlfriend, 17-year-old Siriwan Chaichana, refused to leave with boyfriend Natee. When Natee began pulling on her arm, Jutarat and another girl stepped in to break up the altercation, said Col Chalit.

One of the four youths, Tawat Worrarat, 20, produced a pen-gun and threatened the three girls, at which point several other friends stood up and tried to pull the girls back, he added.

An argument then developed between the four youths and the people at the party, during which Tawat fired a shot from the pen-gun into the group. The shot hit Jutarat in the back, causing her to collapse, said Col Chalit.

Retreating from the scene, Tawat ran to a black Suzuki Steps motorcycle and sat behind Thanwa Pirompak, 19. Natee and the other youth got on another bike and all four sped away, said Col Chalit.

Jutarat was driven on a motorbike by two girls to Vachira Phuket Hospital, where she died at about 4 am, Phuket City Police Deputy Superintendent Lt Col Sompong Boonrat told the Gazette.

An autopsy revealed that a .38-caliber bullet passed through her heart and embedded itself in the left side of her chest, added Col Chalit.

Col Sompong said that a Phuket City Police investigation team was called at 4:30 am to Vachira Phuket Hospital, where Siriwan and a number of Jaturat’s friends were questioned.

Siriwan told police that Thanwa lived in an apartment for employees of Keehin Electricity Company at Soi Budsabok, Rassada.

Police found the four youths at 9:30 am hiding at Thanwa’s apartment.

A .38-caliber pen-gun, two .38-caliber bullets and a black Suzuki Steps motorcycle were discovered at the scene, said Col Chalit.

Thanwa confessed to aiding Tawat’s escape; both were released pending an investigation, said Col Sompong. The two other youths were released without charge, he added.

Man hangs self in “Burmese cemetery’