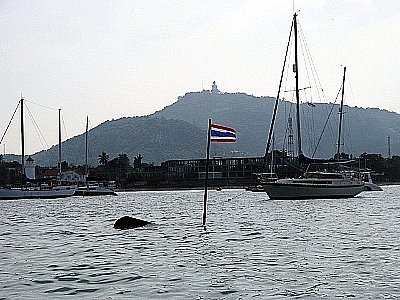 PHUKET: Recent storms have again made two wrecks in Chalong Bay a hazard to mariners.

Markers attached to the wrecked boats by the Phuket Cruising Yacht Club had until recently made both of the wrecks visible to sailors.

However, recent weather has stripped away the markers, making both wrecks invisible during high tide.

“Please exercise caution when maneuvering close to the pier fuelling jetty; there is a sunken wreck not visible at high tide; take care to stand clear when reversing,” wrote Barry Kennaugh in a warning letter to mariners posted on Facebook.

Brent McInnes from the Phuket Cruising Yacht Club explained, “We had them marked with bamboo rods with Thai flags tied to them; recently we’ve had some weather come through and it washed them all away.

“We need Spring low tide to do it all again. At the moment they are unmarked. The one out in front of the fuel dock – the storm kind of knocked the whole top off, so it is now a hazard to navigation,” he said.

The wrecks are both dive boats that sank two to three years ago. The one closer to shore was a liveaboard about 70 feet long and the other, the one opposite the fuel dock, was a day-trip boat.

The one closest to the fuel dock was most likely sunk by rain water, while the other “just sank”, said Mr McInnes.

Recently, a catamaran backed into the one by the fuel dock and broke its rudders.

“We’ve put out a notice to mariners from Singapore up to here. So that’s in all the harbor master’s offices, yacht clubs and mariners [clubs] all the way down,” said Mr McInnes.

“But some people aren’t aware of it [the wreck near the pier fueling jetty]. It just looks like a wonderful spot to anchor, and the other one is just in the middle of the seaway. Pretty easy to run into them,” he added.

For the exact latitudes and longitudes of the wrecks as well as other safety precautions to be adhered to when entering Chalong Bay, visit the Phuket Cruising Yacht club’s website: PhuketCruisingYachtClub.org.