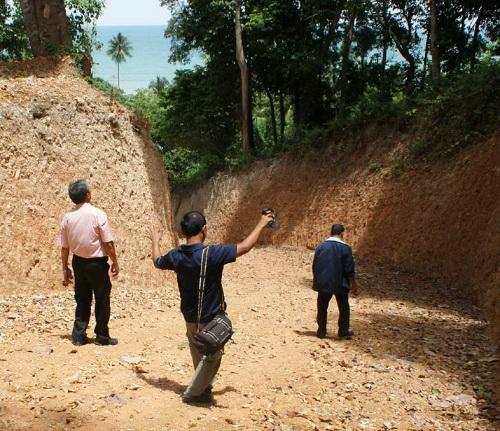 PHUKET: Business owners’ fears of landslides that could be caused by a recently constructed road on a steep hill in the Ao Nang area across the bay from Phuket, led to an investigation on Thursday of the construction site.

Locals also claimed that the road had been developed on Hat Noppharat Thara – Mu Koh Phi Phi National Park land. However, those allegations were quickly laid to rest after officers of the Royal Forest Department’s conservation unit in Krabi double-checked their own maps and were presented with a title deed by the land owner.

“However, the road is built on a hill slope that is steeper than 30 degrees, which is illegal. It is the steepness that has caused people to worry about potential landslides,” he said.

The road in question is currently about one kilometer long and about eight meters wide.

Officers are continuing their investigation into the case.