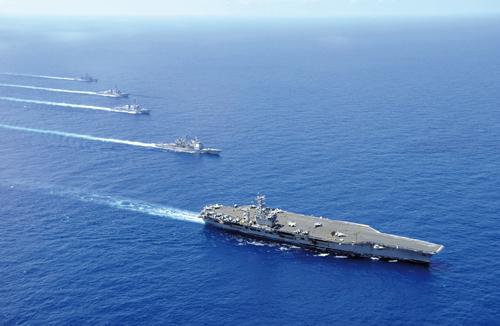 PHUKET: As the end of May draws near, the crews of the USS Nimitz, a prominent American Navy supercarrier, along with the USS Princeton, a Ticonderoga-class guided missile cruiser, are set to moor off Phuket for three days of shore leave – but it’s not just leisurely R&R that the crews have their sights on.

Faithful crew, male and female, will once again be making a positive impact on Phuket and the surrounding region through a handful of community service projects (COMSERV) organized by the Navy League of Phuket (NLP).

To ensure that such projects break ground smoothly, the NLP – officially known as the Thailand Southern Seaboard Council, and a division of the Navy League of the United States – has joined forces with the Rotary Club of Patong Beach, the Lions Club of Patong Beach and the Glenn Defense Marine Group, the husbanding contractor for the US Navy in Thailand.

Adding to the 109 COMSERVE projects that have previously been completed on, off, and around the island, the upcoming supercarrier visit will see 13 more projects carried out at various locations.

Highlighting the nature of the COMSERVE efforts, the following are details about two ongoing model projects.

Just across the Sarasin bridge, north of Phuket island in Phang Nga province’s Tai Muang district, is the Home & Life Orphanage, the humble abode of a wonderful family unit comprising 26 children, orphaned as a result of the devastating 2004 tsunami, and four gracious caretakers.

On the premises of the orphanage are several buildings, including dorms, an office, bakery, and coffee shop. The property is beside a river that had eroded the land, making it unfit for use, while the integrity of the bakery and several other buildings has also been threatened.

Over the past year, the river bank has been shored-up a bit thanks to generous donations from the Rotary Club of Patong Beach, in addition to the dedicated service of US Navy and Marine volunteers partaking in a series of COMSERV initiatives. This ongoing effort has been fueled by the hard work of members of the USS Comstock (LSD-45), USS Green Bay (LPD-20), USS Kidd (DDG 100), and the USS Ford (FFG 54), as well as volunteers from the Royal Thai Navy from the nearby Thai Navy Region 3’s Phang Nga Naval Base.

The next and current phase is to recover and backfill some of the degraded land so that a playground can be built in the near future. This job will utilize about 40 volunteers, 15 to 25 of whom will be dispatched from the US Navy, along with another 15-20 volunteers from the Royal Thai Navy.

The Bang Jo Learning Center is a school for migrant workers’ children in Cherng Talay, Phuket, that was set up in 2010 by the Rghmonya Labour Union’s
Operation Learning Projects Center, which is based in nearby Ranong province.

Legal Burmese migrant worker families living in construction worker camps in Bang Jo and other Thalang areas requested that a Burmese Learning Center be built so their children could receive education equivalent to what they would receive in their home country, Myanmar.

The school is currently run and supported by the Good Shepard Phuket, which is part of the Good Shepard Sisters Thailand. A major part of this foundation’s objective is to empower the students to be productive members of society when they return to their home country.

There are many small projects at the Bang Jo Learning Center which will be accomplished over three days. These include:

• Repairs to the school’s basic electrical system. Thai electricians will do some wiring for safety, while volunteers will install four wall fans.

• Installation of new playground equipment. This needs to be assembled and installed after the playground is cleaned of rubble. The equipment includes a small trampoline.

• Fitting of locks and latches to classroom doors for better security.

• Tiling of two playrooms, which will be completed in collaboration with local Thai masons.

• Painting of the outside of the building’s walls with another coat of paint.

• Playing and interfacing with the 60 children, possibly teaching them some basic English.

• Numerous other clean-up and small painting jobs if time permits.

For more information and inquires on how to contribute, volunteer or become a sponsor of COMSERVE initiatives, contact Brad Kenny, Charter Member and COMSERV Coordinator, US Navy League, Thailand Southern Seaboard Council, on 081-633 4279 in Thailand, or, from outside of Thailand, on +|66 81-633 4279; email: esppkt@ksc.th.com.

Phuket Books: An education of life in the East