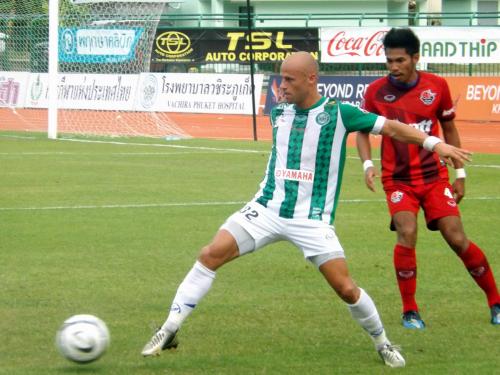 PHUKET: The Islanders moved into fifth place of the 18-team Yamaha League One thanks to a goalless draw with second placed team, PTT Rayong on Saturday evening at Surakul Stadium, Phuket Town.

Actual play only lasted 40 minutes, as this was the conclusion to the game abandoned on June 9 due to rainstorms over Phuket forced the match officials to abandon the fixture five minutes into the second half (click here for article).

The single point was enough to edge Phuket into 5th place, now with 27 points, over a handful of teams, including Trat who are level on points though have a slightly inferior goal difference.

Also, in close contention are Korat, Nakhon Pathom United and BBCU – all who have 26 points – and Saraburi just one point further back.

Airforce United have lost only once in this campaign, surprisingly to lowly Khon Kaen who proved anything is possible.


Thai Premier League (also on a break this weekend)
Keep checking the Phuket Gazette’s sports pages, join our Facebook fan page or follow us on Twitter for the latest local, national and international sporting news.

Thai skipper sails Sansiri into the lead at TRANSPAC