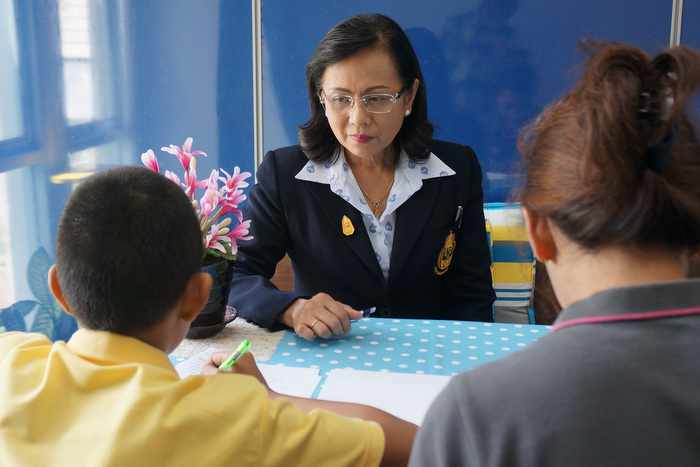 A growing number of teenagers in Phuket are becoming involved in drug abuse and violent crimes in a shift that is concerning local officials involved with juvenile cases, from court judges who hand down sentences to the minors to the counselors tasked with reforming them in the hope the children do not become repeat offenders.

PHUKET: Phuket has enjoyed a slow decline in teenage crime in recent years. That is, until last year, when the number of cases heard at the Phuket Juvenile and Family Court spiked by nearly 50 per cent.

This year is not looking much better, with 126 minors charged as of Wednesday, including most of the gang of nine wanted for stabbing an Italian and a Russian tourist early this month (story here) and the teenage twin brothers who attacked and raped a five-month pregnant woman in April (story here).

“Most of the cases are simple thefts, but the number of serious crimes that involve children is increasing every year,” he noted.

Judge Seni explained that sentences handed down range from community service for misdemeanors to weeks or months’ detention at the Phuket Juvenile Observation and Protection Center (JOPC) at Saphan Hin for more serious offences.

Youths convicted of very serious or violent crimes are sentenced to years of incarceration.

“If youths turn 18 while the police investigation or trial is underway, they will still be tried in the juvenile court because the crime was committed while they were under 18,” Judge Seni explained.

“Even if a person is caught 10 years after committing a serious crime, he will still be tried in juvenile court if he was underage when the crime occurred – but of course the sentence would have to be served at Phuket Prison.”

But youth does not guarantee full protection. The juvenile court can order youths of any age to serve their jail term at Phuket Prison, Judge Seni said.

“Sometimes we do this for very violent crimes,” he said.

As soon as the court decides to hear charges against a minor, the first factor decided on is the child’s freedom.

“The court determines whether the child may remain at home during the trial or is to be remanded to the JOPC,” Judge Seni explained.

Children facing charges of theft or other non-violent crimes are often allowed to stay at home during the trial, but violent offenders are detained at the center.

“After they are released, some young offenders have to report regularly to the Probation Office to make sure they keep out of trouble,” Judge Seni explained.

Probation may last up to two years and often includes a nightly curfew.

Handing down punishments is only one part of the juvenile court’s strategy to reduce teenage crime.

“The first strategy aims to prevent youths from committing the crime in the first place,” Judge Seni explained.

“Our court staff visit schools and explain to students that they are not beyond the law just because of their age.

“We also explain very clearly what the maximum penalties are for minors. This can prompt young people to think before they do something they might regret.

For the children who end up in front of his bench, Judge Seni believes that reform, not punishment, holds the key to a bright future.

“The children of today are the adults of tomorrow. We don’t want to just punish them, we want to reform them,” he said.

“If children can get an education, learn discipline and social etiquette and the value of good moral behavior, they will become better people.”

To that end, Judge Seni ensures that, where appropriate, sentences handed down often include a raft of character-improving measures.

“We aim to rehabilitate the children, for example by providing them with schooling, vocational training or religious instruction, sending them to Navy cadet camp or asking them to volunteer for special community projects,” he said.

It is at this stage that the JOPC steps in.

“After we hand down sentences, we send young offenders to the center, where they can study and undertake training to help them start living better lives with more opportunities,” he said.

JOPC Director Chatree Taweesup has his hands full, with about 35 youths detained at the facility.

“All of the kids living at the JOPC are either on trial for committing crimes or they have been sentenced to stay here after being found guilty,” he said.

The good news is that children taken in as wards of the state during custody battles being heard in Family Court or children “orphaned” by parents or guardians being imprisoned are not taken to the JOPC.

“Instead, they are cared for at the Phuket Shelter for Children and Families located on Koh Sireh,” Mr Chatree explained.

The first order of business at the center is separating the youth inmates according to gender and age.

“The girls sleep in a different building from the boys, and children under 15 years old are separated from those over 15,” Mr Chatree said.

Teenagers incarcerated at the center on minor charges are not separated from those facing charges of serious or violent crimes. Youngsters facing serious crime charges are detained at the center during trial only. If convicted, they are shipped out to a juvenile facility in Surat Thani.

“And even while they’re at the center, youths who are deemed to be a danger to other youngsters are transferred to Phuket Prison,” Mr Chatree explained.

All the children at the center receive the same full schooling as children attending regular schools, Mr Chatree explained.

“We have classes taught by teachers from the Phuket Non-Formal Education Office and the older students are provided vocational training,” he said.

“When they walk out of here, they can continue their schooling or get a job.”

The center also provides opportunities for its young guests to improve their social skills and learn the benefits of good moral behavior.

At his best guess, Mr Chatree estimates that “about 80 per cent” of teenagers released from the JOPC
do not re-offend.

“This is according to feedback from social workers who stay in contact with many of the youths who have left the center,” he said.

Mr Chatree said he understood the dangers of releasing teenagers into the same social environment that led to the criminal activity in the first place.

“To counter this we have social workers in the community who the teenager can talk to about problems, pressures or any other issues they do not feel comfortable talking about with friends or families,” he said.

“This can help a great deal in preventing young people from relapsing into their old bad habits.”

The reform program works for some teenagers, but not others, Mr Chatree confessed.

“But it’s worth the effort. We keep trying in the hope that all of them one day will find their way and no longer resort to crime.”