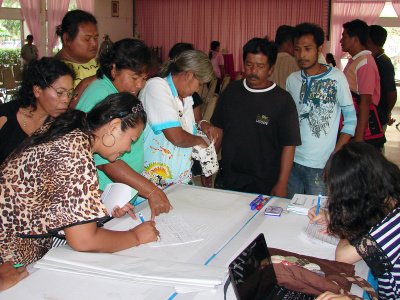 PHUKET: More than 70 representatives from 30 sea gypsy communities across the six Andaman provinces met officials in Phuket earlier this week to voice grievances and defend their way of life.

The meeting, at Phuket Community Hall followed the arrest and release of 17 sea gypsy fishermen of the Pramongkit clan arrested in late December for fishing inside Had Jao Mai Marine National Park in Trang.

Kantang Police, who arrested the men after receiving a report from a park official, seized as evidence 3,100 kilograms of spiny Murex shellfish, one pickup, three longtail boats and other fishing equipment.

Vehemently denying having fished in park waters, the sea gypsies said they showed the arresting officers a copy of a Cabinet resolution passed on June 2 last year, stating the official government policy to protect the sea gypsies’ traditional way of life.

After further investigation, Kantang Police dropped the charges on January 4.

“Those shells were not protected species and we have the right to collect them. No matter how hard we tried to explain this to the officers, including showing a copy of the Cabinet resolution, they didn’t care. They said they wanted to put us in jail anyway,” one of the fishermen told the meeting.

The Pramongkit sea gypsies, from Rassada and Rawai, have yet to return to Trang to reclaim their boats. Without them they cannot make money to cover living expenses, one said.

The Cabinet resolution set short- and long-term policies and measures to ensure the sea gypsies could continue their traditional hunter-gatherer way of life in a sustainable way.

These included the continued use of old-style fishing equipment; access to traditional fishing grounds that have since been declared as inside marine national parks; fast tracking citizenship requests and issuance of ID cards to ensure access to public education and health services; and maintenance of local culture and traditions.

Sea Gypsy representative Sanit Saechua of Rawai told the gathering there are about 12,000 sea gypsies in more than 30 groups scattered across Thailand’s Andaman Coast waters.

Despite some publicity about their way of life in the wake of the 2004 tsunami disaster, they still live as second-class citizens and don’t have the full rights enjoyed by other Thai citizens, he said.

Land rights issues were the biggest concern. Most sea gypsy communities are located in coastal areas and many do not have land title deeds. Some sea gypsy cemeteries are now located inside marine national parks or other areas designated for tourism purposes, Mr Sanit said.

Sea gypsy Yupa Chaonam of the Phi Phi Island community said, “We are not allowed to do anything [in the surrounding area], which we are told belongs to a developer. We just want to know what is our territory and what is not. It’s as if we are a forgotten people with no public development for us.”

On the topic of citizenship, Mr Sanit said about 30 per cent of sea gypsies living in Thai territory had yet to be issued National ID cards. Most, about 3,200, were living in areas off Ranong, while some 900 were in Phang Nga. Only about 10 sea gypsies in Phuket lacked ID cards, he said.

“These people lack access to public health services and can’t even travel without fear of being arrested as illegal aliens,” he said.

There to hear the grievances in person was Preeda Kongpaen, a member of a government-appointed advisory panel on how to best restore and maintain the traditional sea gypsy way of life.

She told the meeting that all the concerns she heard that day would be reported to the Cabinet through the Ministry of Culture, which would push to make the measures specified in the resolution have an impact on the problems.

“The government must pay more attention to solving the problems faced by these people. They inhabited these areas long before the tourism boom, so their livelihoods should not suffer as a result of government tourism development policies,” she said.

Mr Sanit said sea gypsies were disappointed with the failure of the June 2 resolution to translate into real change.

“At first, the Cabinet resolution seemed like a good policy to support our rights, but in the end it is just a piece of paper. Government officers don’t put it into practice,” he said.

But he did acknowledge the gathering itself as a positive step for the sea gypsies.

“It will at least present us as ‘somebodies’ in this society, not ‘nobodies’ as we were before,” he added.