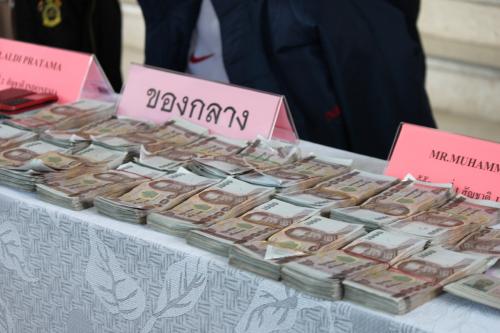 Known as the Global Corruption Barometer, the report compiles an international index of all countries based on surveys of everyday people and how corruption affects their daily lives.

The surveys confirmed Transparency International’s Corruption Perceptions Index released last year, in which Thailand ranked 88 out of 176 countries. Thailand’s ranking identified it as worse than Serbia and El Salvador, on par with Swaziland, marginally better than Malawi, but much better than Iran, Uganda and Afghanistan.

In short, over one fifth of respondents believed that parents in Thailand could not send their children to school or to hospital without facing corruption.

Anurak Rungrueng, Acting Director of the Phuket Primary Education Area Office (PPEAO), and hence the chief administrator of all government schools in Phuket and the neighboring provinces, does not believe one third of a sample population accusing the education system of being corrupt constitutes a problem.

“I don’t think the education system is that corrupt. This number [32%] might be inflated because of the recent news of people cheating on the national teacher admissions test. This gives people a bad perception of the Thai education system,” he said.

“Apart from the teacher admissions test scandal, I do not see any other problems that can be considered as corruption in the education system,” he added.

Regardless, Mr Anurak called on all Education Department officers to be transparent in their affairs as a personal responsibility in order to combat the perception of being corrupt.

“Each official must be held accountable for their work and everyone must be transparent – especially education staff,” he said.

He added that his officers carry out random checks to ensure staff do not take advantage of their positions.

“We regularly check up on our officers, this is especially so when equipment is being purchased. I believe we have been doing great work to keep Phuket’s educational system free from corruption,” he said.

“However, every department has bad people, and I urge anyone who sees any corrupt activities in Phuket’s education system to report it to us at 076-211591,” Mr Anurak said.

Phuket Provincial Health Office Director Bancha Kakong, likewise, sees corruption in the Health Ministry as a national issue, not a local one.

“I think Phuket plays a very small part in the 21% who believe that the Thai health ministry is corrupt. I believe we have a great system to check up on corruption,” Dr Bancha said, without elaborating what measures are in place to curb corruption in his office.

“Where cheating can exist in Phuket is with the bidding for health ministry projects, but this is more about construction companies securing contracts and then passing on the work to another company to complete the project at a cheaper cost,” Dr Bancha explained.

While Phuket’s top health and education officials are willing to dismiss corruption as a non-issue, the police – the worst-rated institution in the survey – recognized that corruption does exist in Phuket and that work still needs to be done to root out the culprits.

“In Phuket, there are some lower-level officers who are involved in corruption. However, we are getting rid of them,” said Col Arun.

“The Royal Thai Police is a big organization – there are more than 200,000 police officers across the country – so it is not easy to check up on all of the officers, but we try to have our own officers investigate crooked police and we punish them in accordance with the law,” he added.

Col Arun believes that public perception may play a large part in such a high number of people (71%) believing that the police are corrupt or very corrupt.

“The nature of police work is to arrest bad people and have them locked up. People do not like police when they are suddenly involved in their lives.

“This is so not only in Thailand; other countries have the same problem as well,” he explained.

“However, we cannot blame the poll or people. We need to take a good look at ourselves to make sure we are doing enough to gain the trust of the people, instead of making them fear or hate us,” he said.

Among the top suggestions for combating corruption among the ranks of civil servants, according to the World Bank and Transparency International, is to raise base salaries.

According to the Royal Thai Police Act BE 2554 (2011), a senior-ranking officer of the rank Colonel, usually indicating the officer is at least a police station superintendent, receives a starting salary of 18,910 baht a month.

A Sergeant Major, however, is to be paid a meager starting salary of 9,850 baht a month.

Col Arun believes that raising police salaries any further would have only a limited effect in reducing corruption among police in Phuket.

“Increasing police salaries might help stop some corruption, but lower-lever officers would not gain much if their salaries were raised. The point is, regardless of rank, police officers should not receive any dirty money,” he said.

“We need everyone to help us check up on police officers on the island and report any illegal activities to us,” Col Arun urged.

“There are more than a thousand police officers stationed in Phuket. There must be some bad police in our force… We will investigate and get rid of them,” he said.

Keep checking the Phuket Gazette’s local news, join our Facebook fan page or follow us on Twitter for the latest local, national and international sporting news.