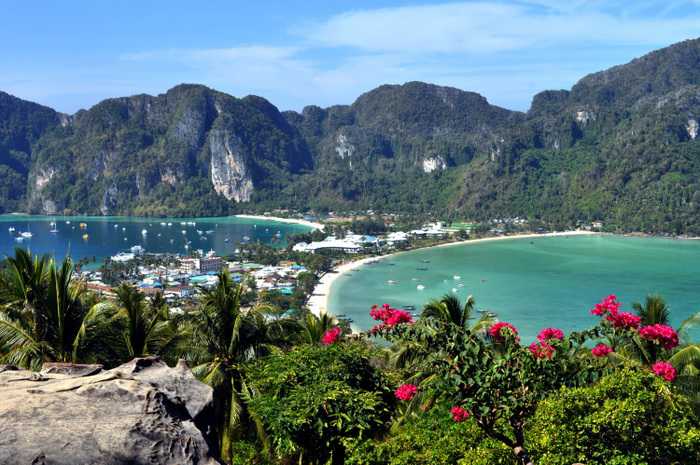 Considering the more than 1,000 visitors that arrive on the island daily – a number that does not include the uncounted number of tourists who arrive directly on the beaches by way of the hundreds of speedboats and yachts – it becomes clear that Phi Phi is under an enormous amount of unsustainable pressure, Ao Nang Administration Organization (OrBorTor) President Pankum Kittithonkun told the Phuket Gazette.

Phi Phi produces an average of 25 tonnes of trash a day. That numbers jumps to about 40 tonnes during the high season, Mr Pankum explained.

The abundance of rubbish is to the point that even Wikitravel makes mention of it: “Unfortunately, there is still plenty of rubbish on the beaches.”

“Tourists must help us create and maintain a pristine island environment. There is too much rubbish for us to manage – making it necessary for tourists to help out by taking their trash off the island when they leave,” Mr Pankum said last week.

“I have already asked tour operators to educate their guests, but nothing changes. Tourists continue to leave their trash on the island.”

All tourists arriving on the island pay a 20-baht fee at Ton Sai Pier to assist in “keeping Koh Phi Phi clean”, according to a posted sign. Though there is often skepticism about where the money goes due to the amount of rubbish found scattered across the island, Mr Pankum confirmed that the entire fee is used for waste management.

“As soon as we arrive on the island, we have to pay a 20-baht entrance fee. Nevertheless, the streets and the beaches are extremely dirty. There is not even one public bin anywhere in the center of town!” a concerned person, who declined to be named, wrote to the Gazette.

“Moreover, some hotels do not hesitate to dump their own trash in areas where [trash] collection is not done, creating… mounds of decomposing bags under the sun.”

The fee at Ton Sai Pier was introduced in December 2012. A year later, the Ao Nang OrBorTor had collected 8 million baht.

“We collect up to 20,000 baht a day from tourists at the pier. The money is then used to pay a private company to haul the rubbish from the island to the mainland in Krabi to be disposed of,” Mr Pankum said.

The boat takes about 25 tonnes of trash from the island daily, weather permitting. Ao Nang OrBorTor pays 600,000 baht per month for the service. During the high season, an Ao Nang OrBorTor boat is used to help transport the overflow of rubbish.

“The OrBorTor has collected 6mn baht so far this year, but we’ve paid more than 16mn baht for waste management for Phi Phi and Ao Nang,” Mr Pankum said. “There is a problem with tour speedboat operators dropping tourists off on the beach instead of bringing them to the pier to pay the 20 baht fee.”
The largest producers of rubbish, however, are not the tourists, they are the businesses on the
island – especially hotels and restaurants.

To encourage businesses to be more proactive in recycling and minimizing the amount of waste they produce, the Ao Nang OrBorTor is considering implementing special rates for trash collection at hotels and restaurants.

“We are thinking of collecting fees based on the weight of the trash we have to remove from the island for them. The more they produce, the more they will pay,” Mr Pankum said.

In Ao Nang, on mainland Krabi, there is a wastewater treatment plant that is able to handle about 3,000 cubic meters of wastewater per day – not nearly enough, according to Mr Pankum.

However, the situation on Phi Phi Don is even worse, he noted.

“We have no wastewater management plant there. Our only hope is that hotels, restaurants and other businesses act responsibly – but I have no faith in them,” Mr Pankum told the Gazette.

“They of course have to treat their own wastewater before releasing it into the sea, but they very well could just be turning the devices on before officers arrive to check them.”

“The brown water seen during the [southwest] monsoon season is only a plankton bloom,” Mr Pankum said.

The off-brown water visible in photos of Loh Dahlum Bay is similar to that seen at Patong Beach in August last year (story here).

Dr Pornsri Suthanaruk, director of the Phuket Environmental Office Region 15, explained at the time that excessive amounts of nutrients in the form of nitrogen and phosphorus likely fed plankton growth in the bay, which was further catalyzed by days of bright sunshine.

Mr Pankum was unable to confirm the origins of the nutrients in Loh Dahlum Bay. However, he noted that officers from the Krabi Environmental Office had come to check the water quality about four months ago, and that everything tested had fallen within acceptable levels.

“If you see any brown water, please let me know and I’ll call the officer so they can check the water quality again,” Mr Pankum said.

A budget of 371mn baht was requested in 2012 by the Ao Nang OrBorTor for a wastewater plant on Phi Phi Don. However, the local government was not able to set aside the necessary 37.1mn baht from its own budget for the project to be approved.

“I couldn’t provide the money necessary from our side, so the project failed,” admitted Mr Pankum.

“All I can do at this point is have officers regularly check on restaurants and hotels to ensure that they are treating their wastewater.”

“Year after year, Phi Phi Island is losing its beauty. Without more responsible and strict management of the environment, Thailand will lose one of its most beautiful places,” the concerned visitor wrote to the Gazette.

After being notified of the current situation, Capt Bancha Daowsook, commander of the Royal Thai Marine Corps based in Krabi, vowed to help the Ao Nang OrBorTor.

“I took up my position on October 1. I have yet to receive any complaints about Phi Phi being dirty. However, I will look into it, and if the Ao Nang OrBorTor needs any help, I will support them,” said Capt Bancha.

The fundamental issue is that the budget allocated for Ao Nang and Phi Phi is based on its registered population, not on the number of people it plays host to every year, Mr Pankum said.

Ao Nang and Phi Phi share the same budget, which is managed by the Ao Nang OrBorTor.

“Phi Phi’s slice of the budget is based on a few thousand people, but the island takes care of the whole world,” Mr Pankum said.

“I don’t know what to do. People from everywhere come to our home, but some of them don’t care what condition they leave it in. The 20 baht per person really isn’t enough for us to manage the waste of the entire island.

“I can only do my best to ensure the island suffers as little as possible and survives as long as possible.”