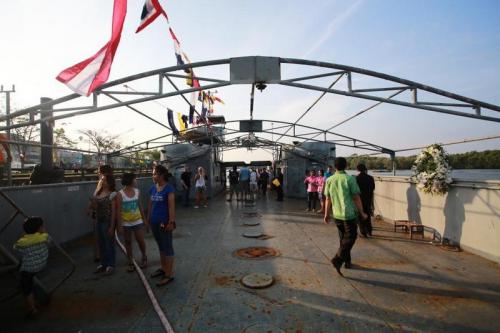 Three Royal Thai Navy vessels have been scuttled in Krabi Province to provide superstructures for artificial reefs as part of the province’s bid to create underwater learning centers for divers and boost the Andaman province’s tourism industry. The Gazette’s Irfarn Jamdukor reports.

“We expect to establish a museum about the wrecks and local marine environment onshore. However, there are no educational signs set up yet,” said Boonnam Chuyradom, an assistant chief of Hat Noppharat Thara – Mu Ko Phi Phi National Park.

The promotion of marine diversity is expected to encourage people of all walks of life and all ages to have a greater awareness of marine resources and to pursue out-of-water learning opportunities about Thailand’s marine systems, he said.

“We believe the project will increase our current visitor rate by 5,000 tourists per year and will bring in an additional revenue of 10 million baht per year,” he added.

First, where an ocean current encounters a vertical structure, it can create a plankton-rich upwelling that provides a reliable feeding spot for smaller fish, which draw in pelagic predators. Quickly following are other creatures seeking protection within the reef or wreck. Shortly thereafter, opportunistic predators such as barracuda appear. Over the years, coral frags begin to take hold and eventually the site will hit an

equilibrium point with the

The ships took part in many natural disaster rescue missions, as well as efforts to help the American Navy quell pirate activity off the Gulf of Aden in 2010 and 2011, Paitoon Panchaiyaphum, director of the Phuket-based southern regional office of the Marine and Coastal Resources Conservation Department, said.

The fleet the ships were part of most notably provided service during Typhoon Gay in the Philippines and also carried rice and basic necessities to the people in Somalia, as well as those facing flooding in Sri Lanka.

To reach their final resting place near Koh Yawasam in Krabi, the retired ships were stripped of their armaments and towed along the coast of Thailand from Ao Udom in Chonburi, around Singapore and back up to Krabi, Mr Kiratisak explained.A forth ship, the 382-ton Luangkladkaew, will also be sunk, near the famous day-trip diving destination of Koh Phi Phi.

The ships’ hulls, resting on the sandy sea floor at 20 to 25 meters, were aligned so as not to be broadsided by any currents, which could potentially topple or move the ships from their current locations, said Mr Boonnam.

“The current can flow naturally and will not affect the ships. Also the sheer weight of these ships will ensure they remain steady and don’t cause any harm to marine resources already established in the bay,” Mr Boonnam said.

“The underwater learning center is special in that all the doors of the large ship have been left open to provide fish and other marine animals protection,” he explained.

Though there is currently no dive site map of the wrecks, Mr Boonnam assured the Gazette that there were plans to accurately map the ships, highlighting points of interest and providing necessary information to dive tourists.

A major selling point in the project has been the hope of increasing tourist numbers by about 5,000 people a year explained Mr Boonnam.Malene Jensen, General-Manger of Kon Tiki Diving and Snorkeling Center in Ao Nang, believed Mr Boonnam was right – the wrecks will help put Krabi

diving on the map.

“For sure, being here in Ao Nang most people know that we are not a diving destination just like Phuket, Khao Lak and Koh Lanta. I mean we are struggling to get ourselves on the map so having these decommissioned warships here is going to give us more attention.

Ms Jensen pointed out that the presence of wrecks at depths within recreational dive limits is a major draw to dive destinations around the world.

The additional sites will help reduce the pressure on the 15 current sites, which are a short boat ride from shore. The relatively shallow existing sites near the mainland suffer from shrimp farming practices, which cause a fine layer of sediment to be deposited on the corals, explained Ms Jensen.

“By adding new dive sites there are other places for the corals to grow, so I definitely think it’s going to help,” she said.

The responsibilities of maintaining and protecting the artificial reefs will fall onto the shoulders of the Marine and Coastal Resources Conservation Department; Hat Noppharat Thara – Mu Ko Phi Phi National Park; and Krabi Provincial Administrative Organization.

“We will frequently do biological diversity checkups at the site and ensure that the system is growing and thriving,” Mr Paitoon said.