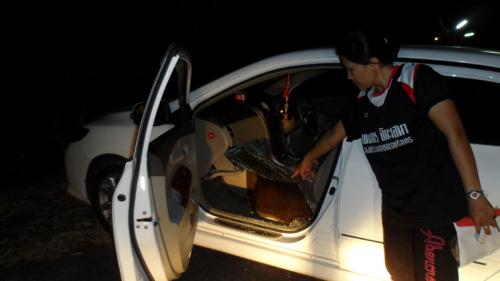 PHUKET: Five car burglaries in two months at the Bang Maruan lagoon in Srisoonthorn has prompted Deputy Mayor Sakchai Mulikabutr to boost the number of security guards patrolling the area in the evenings.

“Chonnakarn Puttharuksa, 34, parked her car near the lagoon and went to exercise there at about 6pm on Thursday evening,” Thalang Police officer Narong Muangdoung told the Phuket Gazette.

“When she returned to her car at 7:30pm, the left window had been smashed and her bag with 2,500 baht cash, one Samsung and two I-Mobile phones had been stolen,” he explained.

Fingerprints taken at the scene were sent to the Phuket Forensics Office to try to determine the thief’s identity, he added.

After being informed of this latest robbery, Deputy Mayor Sakchai announced plans to increase security at the lagoon to ensure residents’ safety while they are exercising there in the evening.

“This has happened five times in the past two months,” he said.

“In the past, the lagoon used to be a place where teen gangs gathered, but recently we developed it into an exercise area,” Deputy Mayor Sakchai explained.

“I have talked about this problem with Srisoonthorn mayor Worrawut Songyot. Normally there is only one security guard in the area. He works from 6pm to 6am.

“We are going to add more security guards, and Mayor Worrawut is also planning to set up CCTV cameras in the area,” he said.

“Last month, we added more lights around the lagoon. We are not ignoring the problem. We will try to solve this problem as soon as possible,” Mr Sakchai stated.