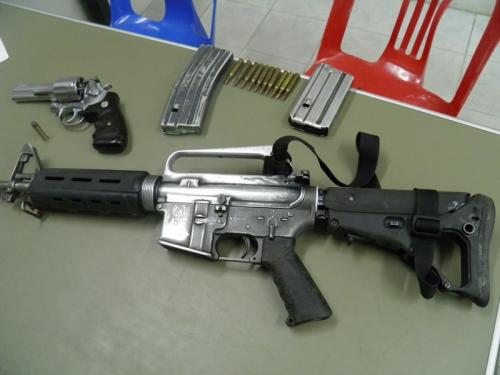 PHUKET: A murder fugitive on the run for a decade was arrested yesterday in Phang Nga, just north of Phuket, after an armed drug binge ended with police shooting out his tyres.

Phonchai “Bao” Phetrit, from Trang, wanted by Ladprao Police in Bangkok on a murder warrant issued in 2003, was finally placed under arrest after he rammed through three checkpoints, including one at the popular tourist beach resort Khao Lak.

Phang Nga Provincial Police Commander Chalit Kaewyarat led about 30 officers in getting the suspect into custody.

The pursuit began after police received reports of a man firing an M-16 into the air at Baan Bang La On, several kilometers north of Khao Lak Beach.

“Villagers said that after the man [Phonchai] fired a gun into the air, he jumped into a Toyota Vigo pickup truck and sped off southward toward Khao Lak,” Maj Gen Chalit said.

“He rammed through the Khao Lak police checkpoint, then headed to Tai Muang and broke through another checkpoint at the Lamkan Intersection, heading toward Phang Nga Town,” he added.

Phonchai then rammed and passed through another checkpoint set up at the Nop Pring T-junction, heading toward Thap Pud on the edge of Phang Nga Town.

“We used a truck to block the road in Thap Pud and gathered all the police officers we could muster from three police stations,” Gen Chalit said.

“Once Phonchai saw the roadblock and the number of officers standing ready, he slowed and started to turn the pickup around, so our officers shot out the two front tyres to stop him,” he added.

Wary that Phonchai was still armed with a loaded M-16, the officers spent 20 minutes cautiously persuading him to surrender.

In searching the pickup, they seized the M-16 and two magazines containing a total of 11 bullets, as well as a .357 Smith and Wesson revolver and bullets.

“We have now contacted Ladprao Police so we can hand the suspect over to face the murder charge,” Gen Chalit said.

“The suspect was not in good condition. He looked like he was on drugs,” explained the Phuket-born Gen Chalit, who worked many years at Chalong Police Station in Phuket.

“Phonchai also admitted that the guns seized belonged to him. He said he wanted to carry them with him at all times because he believed that if he shot into the air, his pain, through black magic, would disappear,” Gen Chalit said.