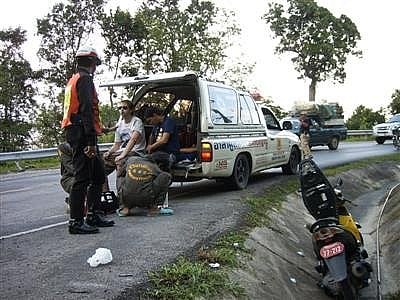 PHUKET: Phuket’s dream of keeping the road accident death toll to zero throughout the Songkran holiday’s ‘Seven Days of Danger’ safety campaign came to an abrupt end in Thalang this morning when a van hit a motorbike with a sidecar, killing one man and injuring another.

The accident occurred at about 5:30am on the Muangmai-Airport Road, near Thalang Technical College.

The deceased was identified as 48-year-old Narapat Surarak, who suffered an apparent broken neck.

By his side was 31-year-old Witthya Chunark, who suffered two broken legs. Kusoldharm Foundation workers rushed him to Thalang Hospital for emergency treatment.

An initial investigation by Thalang Police revealed that both men were riding eastbound on an old salaeng (motorcycle with sidecar).

The pair were transporting two small fiberglass dinghies and their nighttime catch of squid, caught off Nai Yang Beach yesterday evening. The squid were scattered all over the pavement at the accident scene.

Traveling without safety helmets or a rear tail light, the pair were hit from behind by a passenger van driven by Pongsakorn Janjamsai, police said.

The force of the impact crumpled the salaeng and left the van’s front-left bumper dented and a headlight smashed.

In an accident yesterday afternoon, two foreign tourists were injured slightly when the motorbike they were riding came off the road and crashed in the drainage ditch alongside the Patong-Kamala Road.

Another Phuket Suicide: Man found hanged from tree in Chalong