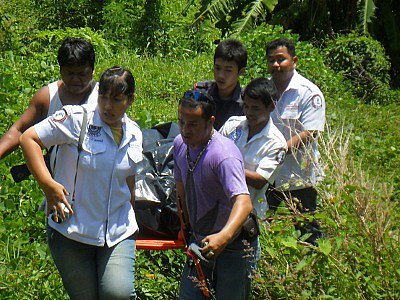 PHUKET: Family are accepting as suicide the death of a man found hanged in a dense patch of jungle off Soi Nakok in Chalong, south of Phuket Town, this morning.

Duty officer Chianchai Duangsuwan of Chalong Police arrived at the scene at 10:30am to find the body of 47-year-old Samer Wongmuang hanging from a tree.

Tied around his neck was his pah kao mah, the traditional Thai waistcloth worn by men.

Near the body police found a blue carry bag and a small plastic bag containing clothes, a salary slip, a packet of Mama instant noodles, canned fish and some mechanic’s tools.

Police say their questioning of those who knew Mr Samer did not reveal any known disputes or conflicts with people, and there were no bruises on his body or indications of fighting at the scene.

One of the dead man’s fellow workers said he spoke to Mr Samer on Wednesday morning as he walked into the same patch of jungle, Lt Chianchai said.

Mr Samer said he was going to drink alcohol in the undergrowth because it was cool there.

The workmate said this was not unusual as Mr Samer often went into the area to relax on his days off, as it was near where he worked.

The workmate added that Mr Samer recently slept at his workplace instead of returning home each night.

Other fellow workers of Mr Samer concurred that he had personal issues that could not be resolved, said Lt Chianchai.

They all believed he wanted to end his life, the policeman said, adding that Mr Samer’s family members agree that suicide was likely.

Welfare ‘gift’ from Bangkok to include Phuket taxi drivers