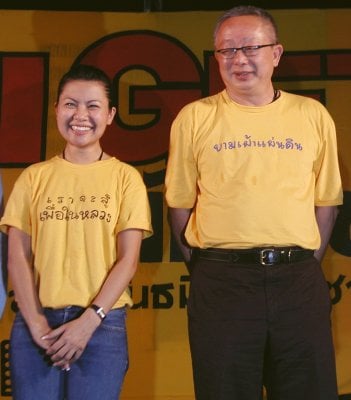 K. Sondhi and Sarocha Porn-udomsak, his co-host on the weekly political talk show on the ASTV satellite channel, Muang Thai Rai Sapda (Thailand Weekly), were the main speakers at the rally, holding forth in front of a giant banner reading, “Thaksin Get Out”.

“It took me a long time to come to Phuket,” K. Sondhi told the assembly. “But I will come to Phuket again and again, even if PM Thaksin resigns.

“What I want to tell people is very important; we must light an intellectual flame. When it is alight, all of us must look after it because it is the flame of democracy.

“I have already lit the first flame. Now I want other people to spread it. We did not light this flame for ourselves alone. We lit it for our children.”

Placing his hands together in a wai, K. Sondhi said, “Pay homage to Luang Por Chaem [famed former Abbot of Wat Chalong], to Tao Thepkrasattri and Tao Sri Soonthorn [the Phuket Heroines] and ask them to watch over the people who have come tonight to join this rally to campaign for Thailand to be made whole again.

“And I want to curse those who have corrupted the nation so that they and 10 generations of their descendants will go to hell,” he added.

K. Sondhi concluded his speech by urging the crowd to join the next anti-Thaksin mass rally, planned for next Sunday at Bangkok’s Sanam Luang.

“February 26 will be an important day because it will gather together huge numbers of people from around Thailand who want to save the nation.

“I may have lit the flame, but I am not a hero. Today there are many people carrying the flame of intellect – I am no different from any of them. We must all get more people to light and carry the flame.”

12 tsunami towers to be tested tomorrow

Overstay charge hiked to B500 a day