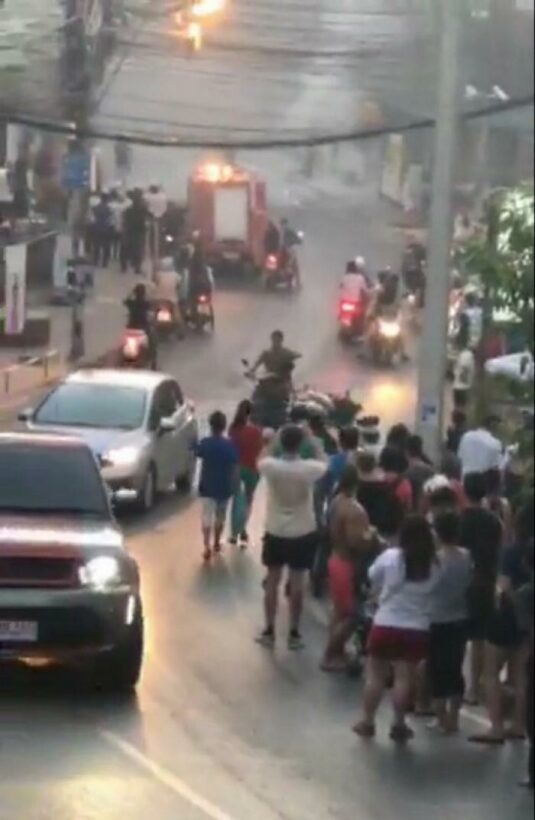 PHUKET: A transformer exploded after a jumble of electric wires sparked last night in Kata, causing thick, black clouds of smoke and hours of blackout in the area.

The incident occurred near the heavily trafficked Kata Beach Resort junction. Crowds of tourists and locals gathered at the scene, watching the sparks and flames in shock.

Residents nearby used fire extinguishers to help put out the flames and prevent them from spreading to their homes.

Karon Municipality rescue workers and firefighters arrived at the scene and spent about 20 minutes battling the flames.

“Nearby roads were also closed off. Luckily, no one was injured. We believe the sparks started because of the messy wires,” said Supaichai Janpet, head of the Karon Municipality rescue team.

Power was restored to the area several hours after the transformer and damaged wires were replaced.

Phuket has suffered heavily over the past 20 years with blackouts, brownouts, and serial full-day outages for “routine maintenance” and “upgrades”. The primary culprit is the legendary, ‘childlike’ mess of wiring hanging from the power poles throughout the island.

The primary victims of the hundreds of hours of electrical outages every year are Phuket’s businesses, which suffer tens of millions of baht in revenue loss and unnecessary expense, most notably for spoiled food in restaurant refrigerators. Hotels and resorts are also major losers, forced into buying expensive generators and supporting equipment to protect themselves from the complaints of angry tourists.