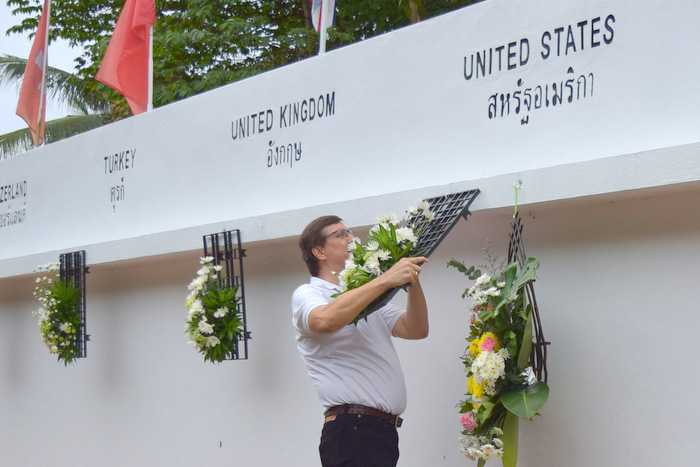 PHUKET: About 50 people gathered at the Tsunami Memorial Wall in Mai Khao this morning to honor those who died in the disaster 10 years ago.

The traditional service began at 8:30am with Buddhist monks conducting a mass prayer, followed by a Muslim service and then a Christian service.

After the religious ceremonies, attendees observed one minute of silence to remember their loved ones who were lost to the waves on December 26, 2004.

Wreaths were laid along the wall in a ceremony starting at 10:30am.

“It has been 10 years since the waves hit Phuket. However, the families and friends of those who were killed still miss them and come to Phuket to remember them,” said Surasit Khantipantukul, chief administrative officer at Mai Khao Tambon Administration Organization (OrBorTor), who chaired the event.

“I hope they all resting in peace, knowing that their families and friends have not forgotten them.”

Mr Surasit noted that “only a few relatives” of the victims attended the service this morning.

“I didn’t see many relatives of the victims here today. They might be going to the Patong candle-light service tonight,” he told the Phuket Gazette.

The small event today has been overshadowed by special services to be held at Khao Lak later today and tomorrow, which will be attended by Prime Minister Gen Prayut Chan-ocha and envoys from a multitude of nations (story here).