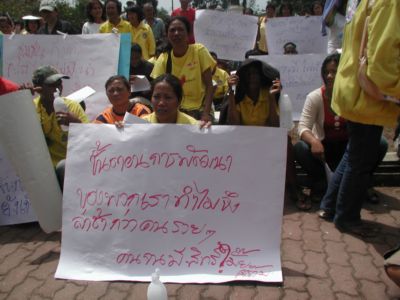 A protest leader, Supat Nunkhao, from Pla Katak Pattana community on Koh Sireh, told the Gazette that the villagers want the provincial authorities to develop their homes and basic services.

“Everyone in our villages has been waiting for help from the government for a long time, but we still have nothing,” he said.

K. Supat said that, apart from wanting a decent place to live and the same access to utilities that other people in Phuket have, the protesters also want to be free from the risk of being charged or evicted due to encroachment, as many do not legally own the land they live on.

“We want the Governor to help stop us being charged with encroachment. There are some villagers now living on public land, but we don’t get development assistance from anyone. All the government agencies just pass the buck. The Tambon Administration Organizations (OrBorTor) don’t take responsibility and push us off to the Provincial Administration Organization (OrBorJor). The OrBorJor sends us off to the provincial authorities, and the provincial authorities tells us it is the Land Office’s responsibility. Now no one helps us,” he said.

Initially the villagers insisted that they would not leave until they had spoken directly to the Governor despite being told that the Governor was away in Bangkok. At about 3 pm, Vice-Governor Tri Augkaradacha returned to the provincial hall and protester representatives handed him a letter demanding the province come to the communities’ aid. They then agreed to leave the scene.