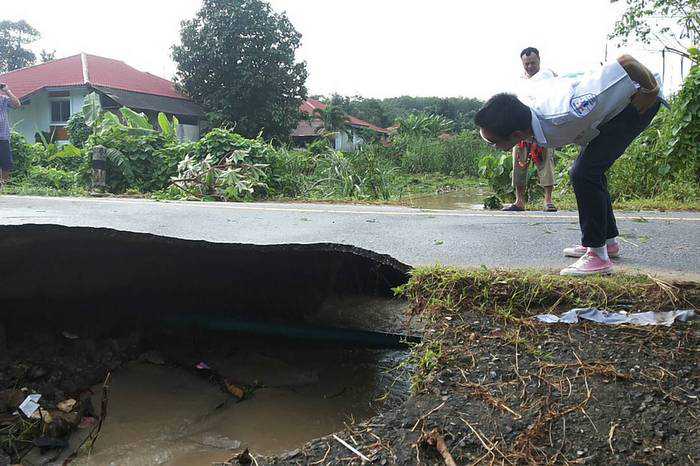 PHUKET: Officers shut down a road in central Phuket today after heavy rains and flash flooding this weekend caused a large, dangerous sinkhole to form on one side of the road.

Part of Rural Road 4008 off Thepkrasattri Road, near Bang Jo Prison in Srisoonthorn, gave way after strong water flow inundated the drain pipe below and washed away the earth around it that was supporting the road.

Local officers told the Phuket Gazette that they immediately closed the road, as they were worried that more of the road would cave in if motorists tried to drive on it.

“Part of the road has crumbled away, but the rest of it is still there with water streaming underneath,” said Amnouy Limpanon, an officer from the Srisoonthorn Tambon Administration Organization (OrBorTor).

“It’s too dangerous to allow motorists to pass on this road right now.”

Mr Amnouy did not specify when the road would be repaired.

“We will fix it as soon as possible,” he said.

Off the ball: The Broncos lose the battle against the Patriots