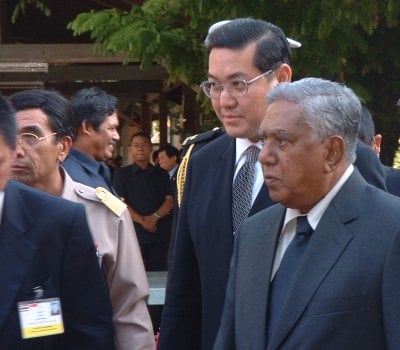 PHUKET: The President of Singapore, S R Nathan, yesterday visited Phuket and took part in a Buddhist ceremony for the victims of the tsunami.

Pres Nathan was accompanied to the ceremony, at Wat Srisunthon in Thalang, by Thai Foreign Affairs Minister Surakiart Sathirathai.

Pres Nathan lit candles before the image of the Buddha, donated robes to the monks and poured lustral water for the victims of the disaster.

The President’s stop in Phuket came at the end of a five-day state visit to Thailand. The visit was arranged last year, but he decided to include an unscheduled stop in Phuket to make merit for those killed by the tsunami.

So far, six Singaporeans have been confirmed killed by the tsunami and 13 more are still listed as missing.