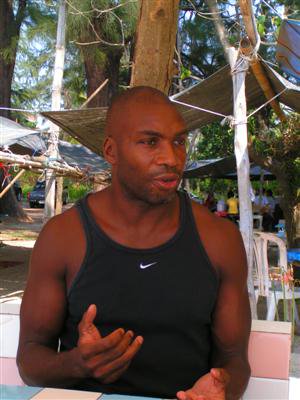 PHUKET CITY: It seems that British tourist Simon Burrowes’s troubles in Thailand will never end. His flight out of Phuket left at 3pm today, but, in a situation that is all too familiar to Burrowes, he was not on it.

Immigration officials at the airport told him they wanted to make some “additional inquiries” before permitting him to board the plane.

A police officer accompanying Mr Burrowes decided that Mr Burrowes would have to go to the Phuket Immigration Office in Phuket City – and miss the flight that had been paid for by an anonymous Thai benefactor.

This time, it seems, he kept his cool.

“It’s not that much of a surprise, really,” he told the Gazette, explaining that after all he had been through, he was fully prepared for a hitch.

“It’s nothing. It really is nothing,” he said, sounding resigned.

Accompanied by the police officer and a Thai national who has been helping Mr Burrowes since he was released from prison, the luckless muay thai fighter is, as this report is posted, in a car heading for the Immigration office in Phuket City.

Friends of Mr Burrowes are attempting to secure him a place on another flight later today.