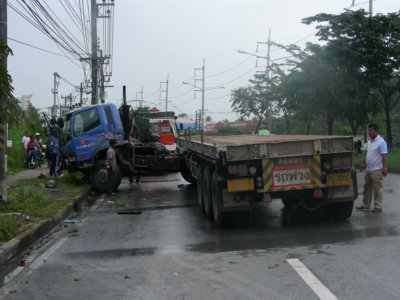 KOH KAEW: A 22-wheel semi-trailer slid out of control on a wet Thepkrasattri Rd early this afternoon and came to rest only after slamming into the footpath.

The driver lost control of the vehicle about 1:30 pm after braking hard to avoid hitting a motorcycle that crossed in front of the truck.

The driver, Vinai Lekpetch, 45, told the Gazette, “I was driving [north] at about 80 kilometers an hour and the road was clear of traffic at that time. But a motorcycle passed in front of my truck, so I had to brake hard to avoid hitting it.

“The truck started sliding out of control and hit the footpath. The road was slippery because it has been raining all day,” he said.

The truck, which was not carrying a load, came to rest near the curve at Tha Reua Shrine.

Northbound afternoon traffic backed up along the main road all the way to in front of Boat Lagoon, about five kilometers away, while police and Kusoldham Foundation volunteers worked to remove the vehicle.

While they worked, all traffic was redirected to the eastern lanes, forcing motorists to drive slowly,

The truck was cleared by about 4 pm.

K. Vinai was not charged with a moving violation.