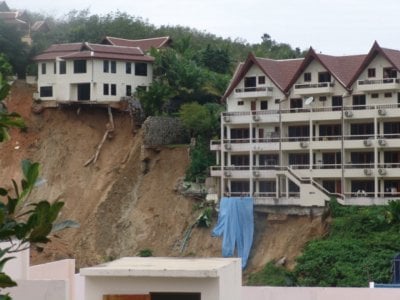 PATONG: Scores of residents at the Beverly Hills complex off Nanai Rd Soi 9 were evacuated to safety early yesterday morning after heavy rains caused a landslide that left part of the foundations of a hillside villa and an apartment block hanging perilously in thin air.

The slump occurred around 1 am, when exposed earth suddenly slumped down onto a construction workers camp below. An 18-month-old Burmese child trapped in the camp was rescued a few hours later. There were no reports of serious injury.

One European tourist, who asked not to be identified, told the Gazette he was awakened about 1 am by a sound “resembling a thunder clap”. That was followed about 30 seconds later by a loud roar as the earth beneath the apartment rushed downslope onto the workers camp.

“I was sound asleep at the time. I just grabbed by passport, wallet and laptop and ran up to the safety of the parking lot with all the other residents,” said the European, who is now staying in a hotel on Soi Sawatdirak in central Patong.

Most of the residents of the apartment block are foreigners, some long-stay tourists like himself planning to stay several months, he said.

His second-floor apartment had an impressive view overlooking Patong Bay and units in the hillside apartment block ranged in price from about 25,000 baht to 55,000 baht a month, he said.

The possibility of a landslide was in the back of his mind when he checked into the apartment block a few weeks ago, but he convinced himself that it was probably safe as it had already survived four or five rainy seasons, he said.

“I am glad to hear that none of the workers in that camp below were killed,” he added.

The man re-entered his room on the second floor to recover more of his belongings after the rain stopped later in the day yesterday.

A man who who described himself as a local community leader in the Soi Veerakij [Nanai Soi 9] area told the Gazette, also under the condition of anonymity, that he thinks more landslides and damage to property in the area are inevitable.

“I have lived here for a long time and we never had any problems with landslides before. I don’t know if it was triggered by the weight of the buildings above or the construction going on below. I don’t want to point the finger at anyone until town engineers complete their investigation,” he said.

“All of the people were evacuated to safety and municipal officials arrived soon after to assess the damage, which included structural damage to some units as well as a broken water main,” he said.

“I think that before too long there will be another slide and more houses will be damaged,” he added.

This morning another local resident, who has lived in the area for nine years and whose home is opposite the landslide area, told the Gazette he thought the slide was the result of deforestation.

An investor from Bangkok who is building an almost completed five-story hotel in the area recently began removing trees and other vegetation from the hillside and set up a camp for Burmese laborers there in order to build bungalows, he explained.

The removal of the vegetation that previously stabilized the soil and the resulting erosion from the current heavy rain was the likely cause of the slide, he said.

Explaining the results of a study of slope stability in hillside areas of Patong, both men concluded that there was a real danger of landslides during heavy rains in two areas: along Phra Barami Rd in Kalim and along parts of Nanai Rd.

During that interview K. Chairat noted that private-sector development in hillside areas was a prime contributor to risk of landslides. The town’s main regulatory tool in preventing landslides is through enforcement of a ban on building permanent structures above 80 meters elevation, he said.

Municipal officials would continue to monitor the situation to ensure public safety, he said.