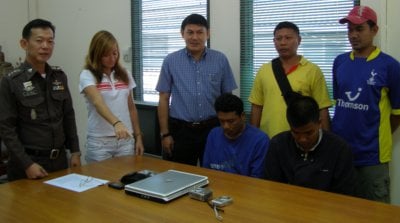 KATA: Police arrested four employees of a private security firm for stealing valuables from the same people they were hired to protect: guests and staff at the Club Med Phuket resort in Kata.

The first two presented were Nakhon Sri Thammarat native Thanawan Wanwet, 30, and his co-worker Sommai Chusit, 40, of Phuket. They were arrested about 9 pm last Friday by an investigation team led by Lt Col Suchart Suwanpirom.

The pair were presented along with a Nokia N80 cellphone valued at 14,000 baht and 3,600 baht in cash as evidence to be used against them.

Also a native of Phuket, K. Jeerasak assisted in the successful police investigation that led to the return of his telephone after it was sold for 4,000 baht at the Ole Mobile Phone Shop on Patak Rd in Rawai.

The two guards, both employed by the Group 4 Securicor (G4S) office on the bypass road, are now being held at Phuket Provincial Court in Rassada.

The second pair were identified as Nakhon Sri Thammarat natives Nattapong Banlang, 28, and Rattanaphum Krungkaew, 31. They were arrested by the same investigation team late Sunday night for swiping a 50,000-baht notebook computer belonging to 26-year-old Jessica Rachel, a Club Med employee from the US.

The computer went missing after she had placed it on a table in a changing room for entertainers on Friday. She noticed it had disappeared about 11 am the following day, she said.

Ms Rachel immediately suspected security staff and filed a report with Chalong Police, who quickly learned that the image of a man who tried to sell a used notebook computer at a shop in the area had been captured by the store’s CCTV camera.

According to the press release, when investigators approached Nattapong at 10:30 pm on Sunday at the PTT service station in Karon, he asked them: “Who are you coming to arrest?”

“We are coming to arrest you,” an officer replied.

The press release said that Nattapong immediately confessed and later led police to Rattanaphum’s home in Soi Koktanode in Chalong, where he was arrested.

The men sold the computer for 10,000 baht at the Mala Video shop and split the proceeds, much of which had already been spent, the press release said.

Without specifying names, the police report noted that some of the suspects’ urine turned purple during a drug test, indicating that they had recently used ya bah (methamphetamine).

The report also said that a background check had revealed that some of the suspects had criminal cases pending against them in Appeals Courts in other provinces.