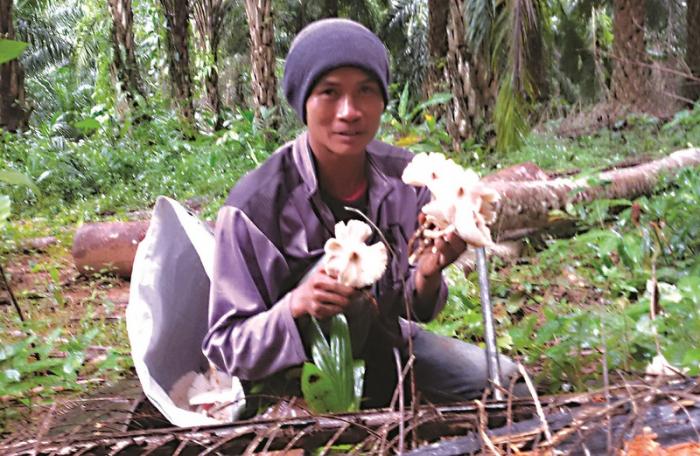 KRABI: Krabi locals are cashing in on a wild cash crop of mushrooms which only appear for about three months a year between October and early December.

The fungus found in palm plantations in Krabi at this time of year is locally known as the ‘June’ mushroom and fetches between 250 and 300 baht per kilogram.

Residents of Klongtom Sub District have been picking the mushrooms as a source of food for themselves as well as income, earning between 500 and 1,000 baht a day. Some of the pickers have managed to collect up to 10kg in a single day, amounting to a 3,500 baht daily income.

Local palm plantation owner Thongpoon Somjit said the June mushroom grows to about eight centimeters tall and the head spreads out to 8-12cm in diameter. “You have to get up early to pick them. The mushrooms thrive in humid conditions with good soil,” he said.

“One of the pickers has already earned 20,000 baht during this year’s harvest. They are popular ingredients for soups such as tom yam, or stir fried with oyster sauce,” said Thongpoon.