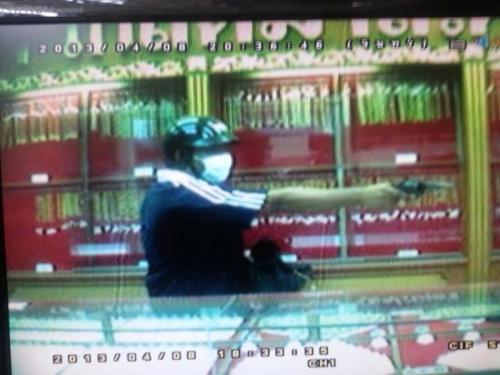 PHUKET: Police have extended their search to the whole of Southern Thailand for the man wanted for a gold shop robbery in Phuket on April 8 during which he gunned down a customer in cold blood (story here).

“Police are doing their best to arrest the villain. We cannot be sure about the culprit’s whereabouts. He might or might not be in Phuket,” Provincial Police Commander Choti Chavalviwat told the Phuket Gazette today.

“But I can assure you that Phuket Police are working with police stations across Southern Thailand, and that police in Surat Thani and Nakhon Sri Thammarat especially are taking this case seriously,” he added.

Surat Thani and Nakhon Sri Thammarat are notorious among Southern Thais as sources of hired gunmen, the Gazette notes.

The case has attracted the attention of regional police commanders, Gen Choti pointed out.

“Maj Gen Krachan Suwannarat, Deputy Commissioner of Provincial Police Region 8 was in Phuket yesterday to hear firsthand any updates on the case,” he said.

Gen Choti confirmed that his officers have followed up all tip-offs from the public. “However, we have received no new information that has proved valuable in catching the killer,” he said.

“We are trying to pressure the killer by setting up checkpoints across Phuket, and we are being especially vigilant at the Tah Chat Chai Checkpoint, on the Phuket-Phang Nga border,” Gen Choti explained.

“We could use more officers in Phuket, but the large amount of work and high cost of living keep policemen from wanting to come here,” he lamented.

While the search for the killer continues, Gen Choti urged everyone to beware of criminals and to keep an eye out for suspicious behavior.

“Hotels should enforce strict security policies. Hotel guards should also focus on looking out for criminals,” he said.

“It can make our job more difficult if criminals hide out in hotels or private rented residences because police are unable to patrol those areas,” he added.

Gen Choti urged anyone with information that might lead to the arrest of the killer to contact the nearest police station, the Phuket Provincial Police at 076-212046, or the Commander himself at 081-8021011.