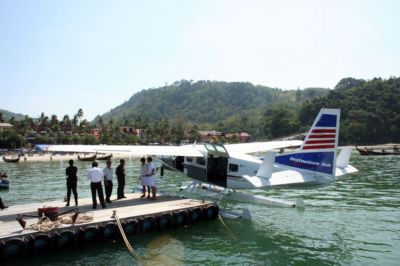 PHUKET: Phuket Vice-Governor Smith Palawatvichai this morning confirmed that Destination Air has been ordered to land its seaplanes further from the shore at Patong Bay.

“After flying with Destination Air, I can now understand the noise problem, even though the planes require only about one-and-a-half minutes to take off.

“The planes should not disturb the tourists on Patong Beach much, but they still make a loud noise and they land here nearly every day,” he said.

“I have ordered them to land far away from any big hotels and resorts and have suggested that they have taxis pick up their customers from a landing point further away,” V/Gov Smith added.

“We would like to check all details of the conditions in the flight permit from the Department of Civil Aviation, such as what level of noise in decibels they are allowed, and we would also like to check the environmental effect of the planes, too,” he said.

V/Gov Smith leads the investigation committee into complaints about noise from the planes (click here for the Gazette’s earlier report).