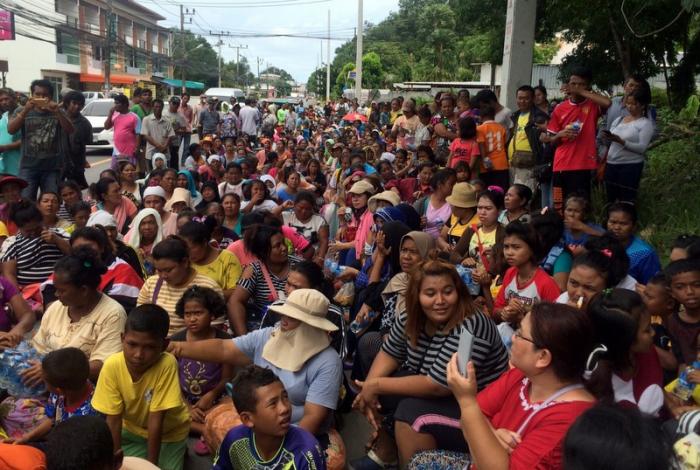 PHUKET: Hundreds of sea gypsies and community activists today marched to Phuket’s Rajabhat University in an attempt to petition the prime minister during his visit to the campus today.

The gypsies had gathered at Rassada Municipality Office earlier in the morning and then marched to the university, where Prime Minister Prayuth Chan-o-cha was meeting with Phuket industry leaders, but they were stopped by authorities at midday.

Security personnel allowed only five representatives from the sea gypsy delegation into the university’s conference room to submit a letter addressed to PM Prayuth.

Secretary-General Wilas Aroonsri accepted the letter on behalf of the prime minister.

“We will collect background information on the sea gypsies and send it to the Prime Minister from the provincial offices before responding to the letter,” Gen Wilas told the delegation.

The letter implores the Prime Minister to help resolve an ongoing dispute between sea gypsies and developer Baron World Trade Co Ltd over land in Rawai.

In their letter, the delegation asks PM Prayuth to check Baron’s land documents, ratify a community Chanote (story here) and set up a special committee to resolve disputes regarding Phuket’s sea gypsy communities.

The letter’s submission comes in the midst of PM Prayuth’s one-day visit to the island, as he headlines the opening ceremonies of Phuket airport’s international terminal, inaugurates ‘Startup Thailand’ and meets with trade representatives at Phuket Rajabhat University (story here).