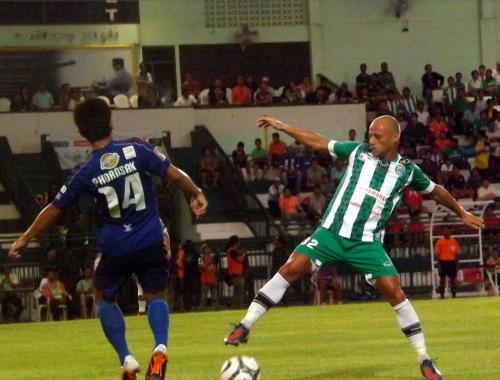 PHUKET: The Southern Sea Warriors won their first Thailand Yamaha One League (YL1) game of the season, beating Suzuki Si Racha FC 3-1 in front of just over 4,200 fans at Surakul Stadium on Saturday.

Last season, Phuket had lost both of its YL1 league matches – home and away – against the Suzuki Si Racha ‘Blue Marlins’.

Phuket FC attacked Si Racha from kickoff and their early pressure paid off in the 8th minute when Geoffrey Doumeng capitalized on a blocked shot by Sakareya Kolae to loft the ball over the keeper and into the goal from 10 yards out.

Phuket looked to be playing a 4-4-1-1 formation with the the tireless Luiz “Dudu” Purcino chasing every pass in the final third with Geoffrey Doumeng playing just behind him.

This blossoming partnership was a constant threat to Si Racha and in the 18th minute Dudu used his blistering pace to latch onto a through pass on the right and slip the ball under the advancing keeper from the just inside the box.

After the second goal, Phuket FC sat back and took the pressure off Si Racha, who capitalized on this by pulling a goal back when Sutjarit Chantakol rose the highest to win a header from a corner in the 43rd minute.

Geoffrey Doumeng, who was the game’s man of the match, was at the heart of every attack for Phuket and his composure on the ball and eye for a pass caused Si Racha a lot of problems.

The Southern Sea Warriors first win of the season moved them up to third in the league on five points. Si Racha are bottom of the league with only one point from three games.

Phuket FC’s next match is a Toyota Cup match against a strong YL1 team, PTT Rayong FC, on Saturday, March 23, at Surakul Stadium at 6:30pm.

The team then hit the road to play their next YL1 fixture away to TTM Lopburi on March 31, before returning home to play Royal Navy on April 7.