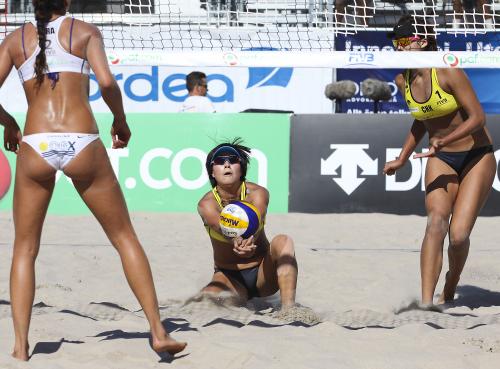 After staging the event in Phuket for six years, the tournament was moved to Bang Saen, near Pattaya, last year but changes to the regulations by the FIVB have allowed the organizers to reconsider using Phuket to stage the tournament.

Mr Geoffrey Rowe, managing director of Pentangle Promotions Co Ltd, the license-holders for the tournament, told the Phuket Gazette today that “the move away from Phuket to Bang Saen was made on financial grounds.

“However the FIVB has amended the regulations to encourage more promoters to stage events. The result is that the overall cost structure has been reduced making it viable to return to Karon Beach.

“Prior to selecting Phuket, we considered other venues interested in hosting the event, [including] Hua-hin, Pattaya and Samui.

“However, Phuket was considered the most suitable venue as Karon Beach has the best quality sand and the most picturesque setting. At the same time, the local sponsors in Phuket who previously supported the event are all keen to continue.

“Now, we need the provincial authorities to agree to us using the venue. Once this is done we can start preparations,” he said.

The 2013 tournament will be part of the FIVB Beach Volleyball Open series and is expected to draw leading teams from around the globe to Karon Beach, which, as one of the few natural beaches on which the FIVB beach volleyball tour is played, has always been popular with the teams.

To create local interest in the sport, beach volleyball clinics and an inter-schools tournament will be held alongside the main event.

The Phuket Gazette is a proud, charter sponsor of this world-class event, as are PGTV and ‘Phuket Today’, the island’s only national television show – now aired eight times a week on UBC/True Visions (channels 99 and 58).