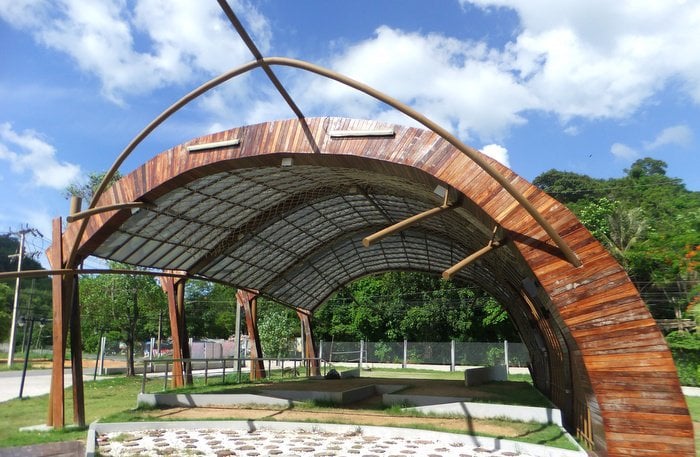 PHUKET: A budget of 20 million baht has been injected into the stumbling, soon-to-be animatronic Sea Gypsy Cultural Center, which saw costs of the facility balloon from 2mn baht to 5.4mn baht before it started to deteriorate into a derelict shell of a building that has become a shelter for the homeless.

Located in a small, nondescript soi at Laem Tukkae, out of sight from the beach, where Koh Sireh tourists board speedboats for day trips to islands, the unoccupied multi-million baht center has descended into disrepair: roof panels have fallen off, a mattress lies under a supporting structure and another floats in a pond nearby (story here).

The center, originally slated for completion in 2012, never opened because it was not completed when it was transferred to the Rassada Municipality in May of that year.

In 2013, Rassada Municipality Chief Administrative Officer (palad) Dechakanee Leelanont said a budget of two or three million baht was necessary to finish the landscaping. At that point, the municipality said its job was only to watch the building while the Department of Public Works had agreed to budget for the extra millions.

“The Pubilc Works ended up not allocating any further funds toward the building, so we have had to take it on ‘as is’ and do our very best to develop an attraction that will be a great benefit to both academics and tourists,” Mr Dechakanee told the Phuket Gazette.

Though the municipality did not have the funds to finish the building, they have allocated 20mn baht over the next three years to develop the museum itself.

“We have nothing now but an empty building given to us by the Phuket Cultural Office,” Mr Dechakanee said.

“Therefore, earlier this year, we hired Phuket Rajabhat University to study the history of the sea gypsies; develop and design exhibits; and also plan out a management system.”

The study is expected to be finished by the end of the year.

“Once the study is finished, we expect it to take about three years for us to open.”

Though the university has yet to complete its study, Mr Dechakanee confirmed that ‘4D’ animatronics were already part of the plan.

“However, if they decide that is not the best way forward, we will make the necessary adjustments.”

In May 2012, the center was described by Mr Dachakanee as one attraction among many that would contribute to the development of Koh Sireh.

“Koh Sireh has been neglected for so long, but Mayor Phudit Raksaraj has a plan to bring this part of town back to life. He wants to develop Koh Sireh into an important tourist attraction,” he said at the time.

The proposal for the center – said to be the first of its kind in Asia – was first announced in 2009 as part of a plan to preserve and exhibit the life and culture of Urak Lawoi sea gypsies.

Two million baht was provided for the construction of the center by the Phuket Provincial Public Works Office, and the remaining 3.4 million baht came from a financial stimulus package launched under the government of Prime Minister Abhisit Vejjajiva.