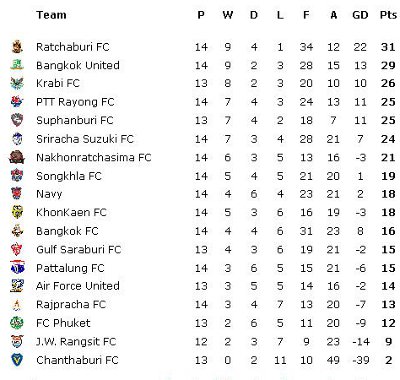 PHUKET: Phuket FC recorded their first home win of the season last night with a scrappy 2-1 win over mid-table side Bangkok FC.

Despite gorgeous weather, only 1,200 paying fans turned up for the 6:30pm kickoff at Surakul Stadium, which got a number of improvements thanks to its recent hosting of the 28th National Youth Games.

The most notable of the additions is a nice new video-capable, LED scoreboard, which towers above the east stands.

After weathering the opening salvo, it was Phuket who opened the scoring at 17 minutes when defensive stalwart Nene Bi went on the attack and headed home a beautiful cross by Wuttipong Sittitanyakit.

Some exciting play followed, with Bangkok FC’s Korean forward equalizing at 39 minutes when he converted a header following a long free kick from midfield.

Just seconds before the first-half whistle blew, Phuket’s Watcharakorn “Bird” Klaithin darted like a swiftlet through four Iron Bull defenders before finishing with a beautiful scoring shot to the right of the Bangkok FC keeper, sending the fans into a frenzy.

The Islanders came out on the attack in the second half, but all hopes of an insurance goal vanished at 59 minutes, when Phuket defender Wuttipong Sittitanyakit got his second yellow card of the night and walked off the field head down.

The yellow card was one of thirteen handed out by the referee, who was jeered loudly by the crowd after many questionable calls. Phuket’s coach Miloš Joksić, who spent parts of the match fuming at the sideline, later told reporters he was very happy with the team’s fighting spirit and the game’s final result.

Bangkok FC pressed the attack for the remainder of the match, but Phuket held on for its first home win in 10 matches.

In the only other Yamaha League One match played yesterday, hosts Songkhla were held to a scoreless draw against southern neighbors Pattalung.

The win puts the Islanders in a good position to begin their climb out of the relegation zone.

Their next match will be against a troubled Chanthaburi FC side that sits in dead last and has yet to win a match all year.

The Wild Hares have just two points from two draws and are on a staggering -39 on goal difference with half a season left to play.

Chanthaburi’s recent losses, including 0-7 and 1-9 losses at home against Bangkok FC and Ratchaburi Mitrphol FC in recent weeks, were cited to the fact that the team’s foreign players refused to field for the matches in protest at not having being paid in over a month.

The club has reportedly now paid the salaries of its African and Malaysian players, who are expected to field next Sunday in Phuket.

Kickoff for the match is set for 6:30pm.