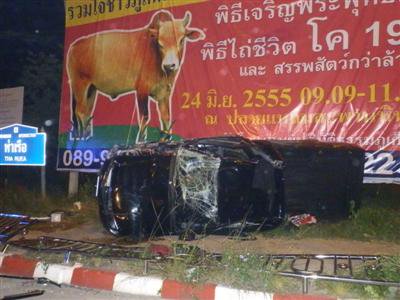 PHUKET: Police believe that the driver of a pickup who died after slamming his vehicle into the Phuket Heroines’ Monument before dawn yesterday fell asleep at the wheel.

Thalang Police were notified of the accident at Phuket’s most iconic roundabout just before 4am yesterday.

Arriving at the scene, they found the wreckage of a black Mitsubishi pickup against a roadside billboard.

Its driver, 42-year-old Somyot Piwsalap, was thrown from the truck and was found lying unconscious on the pavement with multiple wounds.

He was surrounded by a large crowd of onlookers when police and Phuket Kusoldharm Foundation workers arrived.

Mr Somyot was given oxygen and CPR at the scene, but was pronounced dead on arrival at Thalang Hospital.

According to witnesses, Mr Somyot’s pickup was travelling at a high speed on Thepkrasattri Road southbound when it hit the hard, concrete base of the monument. Deflected to the left, the vehicle rolled three times and took out a roadside safety railing before finally coming to rest against the billboard.

Police identified the deceased by his civil defense volunteer ID card, issued by Thepkrasattri Municipality. They contacted the municipality in order to notify his relatives of the tragedy.