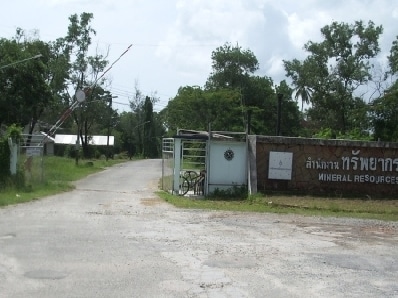 The final public hearing, organized jointly by the Department of Rural Roads and Phuket City Municipality, was held at the project site on the afternoon of July 8.

About 100 people gathered for the event, which was held under a tent outside the grounds of the Mineral Resources Center 2, across the street from the entrance to Suan Luang Park on Chao Fa East Road.

The hearing was chaired by Anupong Jongwang, head of the education and information technology division at the Rural Roads Department Region 8 headquarters in Krabi.

There was virtually unanimous agreement that the project should move forward as no serious objections were put forward.

The 24-million-baht road will be built under the Department of Rural Road’s “Dust Free Road” initiative, which is funded under the Thai Khem Khaeng (Strong Thailand) fiscal stimulus package.

The road will connect Sakdidet Soi 1 and Chao Fa East Rd, passing though two plots of Treasury Department land covering a total of about 20 rai.

The first plot, about 12 rai, is currently assigned to the Industry Ministry’s Primary Industries and Mines Office (PIMO), Region 4. The second 7-rai plot is used by the Phuket Juvenile Observation and Protection Center.

The 684-meter-long section needed to complete the road will start at the back of PIMO grounds and connect with the existing Phang Muang Khor Road that is home to several government offices, including the Phuket Provincial Employment Office and Red Cross Regional Blood Bank.

Phang Muang Sai Khor Road which has yet to be officially named, is currently a dead end road that exits onto Sakdidet Soi 1, near the junction with Rattanokosin 200 Pi Road.

Upon completion, the new road should ease growing rush-hour congestion along Chao Fa East Road and the narrow Sakdidet Soi 1, which is currently the only connector between Saphan Hin and points west and south.

“I guarantee Phuket City people will benefit from this road. It will make driving more convenient, reduce the number of accidents along Sakdidet Soi 1 and save lives,” Mayor Somjai said.

The road should provide some improvement to long-suffering commuters in the area, but is unlikely to quell local outcry over the need to complete Sakdidet Soi 7, a project which has been held up by over a decade because it would involve the destruction of protected mangrove forest.