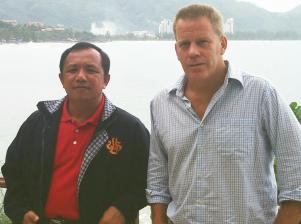 PHUKET: For the first time since the Samsara luxury property development was put in the public spotlight by the Phuket land probe, representatives of the owners and developers of the project have spoken out about what they see as the unfair treatment they have received from the government. Colin McKay, Managing Director of development company Asia Island Homes (AIH), told the Gazette yesterday, “It looks as though we are guilty of investing in Thailand, of trusting the government and of paying our taxes.” He accused Bangkok and its investigators of putting “Sars into the development industry”. He also intimated that if the land investigation was not resolved swiftly and transparently, he might sue the government for compensation totaling, possibly, hundreds of millions of baht. The Samsara site was one of five visited soon after the probe began by Pol Maj Gen Pansiri Prapawat, Deputy Commissioner for General Investigation, with some 25 investigators and 15 journalists in tow. At that time, Gen Pansiri intimated to reporters that the five pieces of land were being investigated because of possible irregularities in the issuance of land papers sometime in the past. Yesterday Mr McKay and Somchai Duangkae, a director of project owner Pacific Villas Co (PVC), revealed that, because of the media circus surrounding the General’s visit to Samsara, buyers of villas there had put on hold payments totaling 42 million baht. Mr McKay said he believed that much of this amount would probably be canceled altogether. The two businessmen said that thorough research had been made into the validity of the land papers before PVC bought the 14-rai parcel in 2001 for 12 million baht. “Between us, we and our clients used a total of seven law firms – from the biggest, most prestigious international firms in Bangkok down to local law firms here – and three land valuation companies, all stock-exchange-approved [to check all the documents].” K. Somchai criticized the way the investigation was being handled. “We back the investigation,” he said, “but the way it’s been done, we don’t agree with that – it’s bullshit.” Mr McKay agreed. “It’s been totally mismanaged. What do we do now? We don’t even know if we are being investigated. No one’s told us, nobody’s told anyone to stop work. No one’s told us who is investigating us. They’ve announced everywhere that there’s an investigation going on, but they’ve never told us. We do know that when we go down to the Land Department to ask for our documents, they don’t show them to us. “We need to know, [is the land] being investigated; who’s investigating it; what are they investigating it for; how long will the investigation take; if we’re found to be at fault, what the outcome will be; if we’re right, what will happen; and when will they tell us?” “We’re clean, and everything as far as we can see is clean. In Europe and the US there are rules: what’s on the documents [registered with the government] is fixed. They can check it, but at some stage they have to say, ‘That’s done.’ They can find out who did things wrong, but the papers have to stand. “We did all the due diligence, but how will we ever know? Who the hell will come here and invest if you can’t trust the documents?” He estimated that, through Samsara and other previous projects, AIH and PVC had attracted total investment to Phuket of a billion baht, and that other projects were bringing in amounts “far, far bigger than any government official can possibly imagine. Since I’ve been here – four years – there’s been at least 8 or 10 billion baht in investment into the island. “There has to be a central land registry and people have to be able to trust what’s in it. And they have to state that once a document’s in the registry, that’s it, it can’t be changed, that they will honor documents issued by them.”