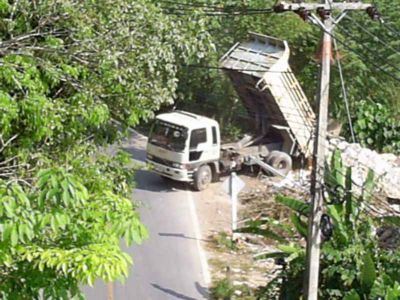 NAI THON: More than a month after being given photographs showing a truck belonging to Vasi Construction Co Ltd dumping trash near Nai Thon Beach, the Sakoo Tambon Administration Organization (OrBorTor) says it cannot press charges because nobody has been caught in the act.

The photos were sent to the Gazette in January by a concerned reader. The site is about 200 meters from Nai Thon Beach and about four kilometers from the Sakoo OrBorTor offices.

Venich Thammawong, chief of the Sakoo OrBorTor Public Health Department, told the Gazette on February 25 that, “Even though we have evidence, we did not catch them in the act, so if we accuse them of dumping they could deny it.

“We keep inspecting the area and waiting to catch someone dumping there, but we’ve never caught them,” he added.

K. Venich said that he believes more than one company has been dumping trash at the site. “We can’t do anything for now except wait to catch them at the scene,” he said.

“It doesn’t matter whose land it is because dumping trash, or even creating a dump on your own land without permission, is illegal because it affects the health of the local community,” he added.

Despite repeated attempts by the Gazette to hear their side of the story, Vasi Construction has continually declined to comment.

Finally, on March 10, Sakoo OrBorTor chairman Tawik Kuanun told the Gazette, “We will fence the site off with barbwire in the next three days.”

On the same day, K. Venich told the Gazette, “I have been going back and checking the dump site and the trash pile there is getting smaller.”

The Gazette has yet to learn of any further action being taken by the Sakoo OrBorTor.