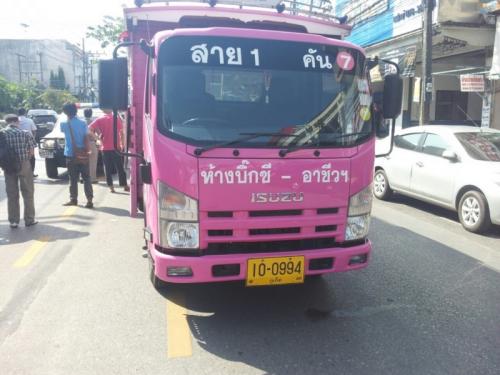 PHUKET: A Russian tourist suffered head and leg injuries when he was hit by a ‘pink bus’ in the middle of Phuket Town yesterday.

The tourist was named as Kirill Kulagin by Lt Col Yongyuth Kongmalai, a deputy superintendent at Phuket City Police Station.

“The man was hit by an OrBorJor [Phuket Provincial Administration Organization] pink bus at about 10am, when he parked his motorbike in front of Lan Nawamin on Phuket Road,” Col Yongyuth said.

Mr Kulagin, 43, was conscious but unable to talk.

“He suffered head injuries and a broken leg,” said the colonel.

“He was taken to Vachira Phuket Hospital, where doctors were preparing to operate on his leg yesterday afternoon,” he added.

The bus driver, named only as “Mr Pairoj”, was shaken by the incident.

“He was in shock and unable to give any information,” Col Yongyuth told the Phuket Gazette.

Col Yongyuth could not provide Mr Pairoj’s family name because he was not carrying his driver’s license at the time of the accident.

“From the tyre skid mark at the scene, it seems the bus was travelling at speed when it hit the man… He will be called in later to give his statement,” Col Yongyuth added.