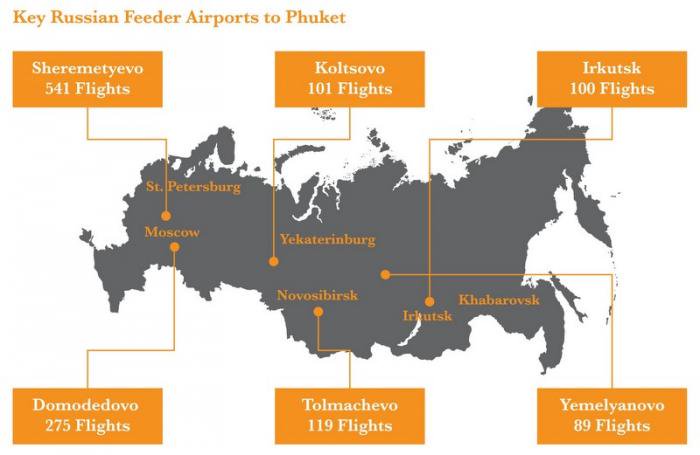 PHUKET: Last year, rebounding Russian tourism contributed an estimated 30 billion baht (approximately US$848 million) to Phuket’s economy, according to C9 Hotelworks‘ latest report on the segment. One clear-cut metric of the attraction of Phuket for Russians is that 51 per cent of the country’s travelers to Thailand now come here.

Total 2016 Russian passenger arrivals on international flights to Phuket were up by 51 per cent year-on-year. This is substantially higher than the growth of the total market of travelers from Russia to Thailand, which rose by 23 per cent in the same period. A major factor in the uplift was the crash of a Metrojet flight from Sharm El Sheikh to St Petersburg in October 2015. The event resulted in Russian tour operators suspending flights to Egypt and diverting customers to alternative holiday destinations such as Phuket.

Another factor that helped increase the overall number of outbound Russian tourists on a global basis has been the strengthening of the ruble, which began appreciating early last year due to rising oil prices. This leading indicator is expected to continue with the trend in Russia’s improving political and economic relationships with their key trading partners.

Bricks-and-mortar travel agencies are currently the most influential distribution channel for airlines and
hotels, accounting for approximately 80 per cent of total Russian tourists. Families make up 65 per cent of total visitors, followed by couples, friends and solo travelers. These segments favor four-star hotels and increasingly use nontraditional accommodation. Russian tourists typically spend 5,520 baht per person per day, with an average length of stay (ALOS) of 10.5 days.

Frequent Individual Travelers (FITs) are a growing segment in Russia’s outbound tourism, as
younger tourists are more focused on value for money and personalized trips. Despite tour operators resuming flights to Egypt in January this year, Phuket will continue to attract Russian tourists as it’s an affordable destination with favorable brand sentiment.

You’ll find a full copy of this latest C9 report, rich in statistics, tucked into your copy of the Phuket Gazette this Saturday, March 18.