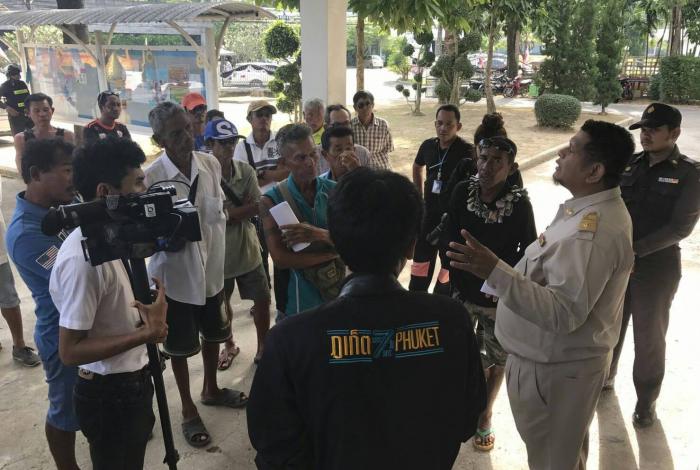 PHUKET: A number of vendors working in the vicinity of Surin this morning submitted a letter to the Cherng Talay OrBorTor demanding a 10-percent zone to operate in, similar to the arrangement at other Phuket beaches (except Laem Sing which is now apparently private).

Surin, which previously operated under the 10 percent rule, was converted to a ‘virgin beach’ in late 2015 by Cherng Talay OrBorTor President Ma-ann Samran, who cited the vendors’ failure to follow rules as the reason behind the change (story here). Since then, no vendors have been allowed on its sands.

It was then declared as a ‘Beach of Honor’ in June last year (story here and here), in honor of HM King Bhumibol Adulyadej and HM Queen Sirikit’s visit to it in 1959 (story here).

Mr Ma-ann accepted the letter today and said that he would bring the issue to the attention of the beach management committee as soon as possible.

“The beach vendors at that time had agreed to the virgin beach concept, which means no umbrellas, loungers or mattresses. Since the beginning of the high season, however, some of them have been disobeying the regulations again, for which we have arrested and duly ‘punished’ them,” said Mr Ma-ann.

“The vendors kept asking why other beaches have 10-percent zones, so I told them to write a letter explaining their reasons and how they would plan to manage it, if implemented,” he added.

Despite their terrible track record of following beach management rules – which led to their exclusion from the 10-percent zone category in the first place – Surin vendors have reportedly been “very upset” regarding the matter. They particularly resent that sun loungers are now officially allowed at other beaches, including Patong, since late last month (story here).

“All I can do is bring the matter to the attention of the committee, but until an official decision is made, Surin will remain a virgin beach,” said Mr Ma-ann.