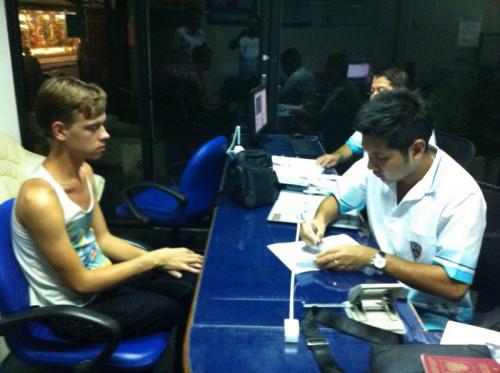 PHUKET: A 22-year-old Russian man was arrested by Immigration Police in Patong last night after he was caught attempting to sell spa products to a plainclothes officer.

Immigration officers arrested Russian national Alexander Pushkarer at a shop on the Patong beach road at about 7pm.

“We were informed by one of our officers that a foreigner was working illegally at a shop,” Capt Angkarn Yasanop of Phuket Immigration told the Phuket Gazette.

After watching Mr Pushkarer sell souvenirs, clothes and spa products to tourists, the officers sent in a fellow member dressed in plainclothes to pretend to be a customer.

“We asked to see his passport and work permit,” Capt Angkarn said.

“However, he admitted he did not have a work permit,” Capt Angkarn added.

Mr Pushkarer was taken to Patong Police Station and subsequently charged with working without a work permit.

“After he has been served a fine by the court, he will be handed back to Phuket Immigration. We will transfer him to Bangkok and he will be deported from there,” Capt Angkarn said.