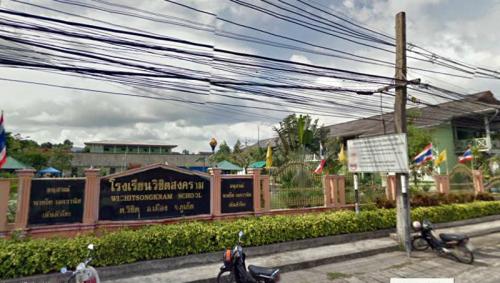 PHUKET: A Phuket father has filed an assault complaint with police against two teachers at his 9-year-old son’s school.

The father told Wichit Police on Tuesday afternoon that teachers at Wichitsongkram School had struck his son several times over the last month.

“Mr Pichit told us that on June 14, that one teacher hit his son’s hand and made it bleed,” said Wichit Police officer Suporn Muangkai.

“On July 3, the same teacher ordered a girl in the class to hit boy’s back.

“On July 13, the boy had a headache and ‘seemed different’, so the father questioned him and found out that another teacher had hit him on the head,” said Sub Lt Suporn.

Mr Pichit took his son to Vachira Phuket Hospital to be examined and submitted the medical report to police when he filed his complaint.

He said he had first reported the problem to the Damrongtham Center* (the Provincial Ombudsman’s Office) but “nothing happened,” so he turned to the police.

Police plan to meet with the director of the school and will also invite both parties to come to negotiate at the station, said Lt Suporn.

Last November, a Phuket teaching assistant was suspended from her job at a nursery school after striking a 4-year-old child (story here).

In that case, the Damrongtham Center had taken action on the mother’s behalf.

* Officers at the Damrongtham Center today confirmed to the Gazette that they have compiled the necessary documents to be sent to the director of the Phuket Primary Educational Service Area Office. They are now waiting for final approval from a vice governor so they can file the complaint.