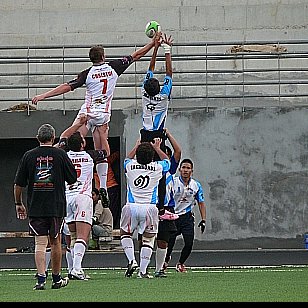 PHUKET: THE 13th Phuket International Rugby 10s kicks off tomorrow May 27 with Phuket’s own Vagabonds intent on providing stiff opposition for would be challengers in the event.

Karon Stadium again plays home to this hugely popular tournament and after recent rains the surface is in ideal condition for rugby.

Phuket Vagabonds rivalry with the Bangkok Bangers will certainly entice local support, while the Thai Legends will fend off opposition from Australia, South Africa, the Middle East and Asia. Last year’s champions the Kriel Roosters (RSA) will be back to defend their title as will last year’s Coffin Dodgers Veterans champions, Morrabbin Rams (AUS).

This year’s event also features an U-15 tournament to include the Phuket Lomas, Bangkok Lions, Centaurs Singapore and Krabi who will play their qualifying matches on the new synthetic rugby pitch at Thanyapura Sports and Leisure Club.

The finals for the U-15 competition will be played in Karon Stadium as a curtain raiser for the senior finals on Sunday 29.

The tournament promises three days of great rugby and fun for all the family and will also help raise funds for the Children’s Scholarship Program, which is run in conjunction with the Asia Center Foundation (ACF).

Director of ACF, Roelien Muller said the relationship between the Phuket Vagabonds, ACF and the Rugby 10s event, was an important one for the community.

“It all began during 2004 by invitation of Pat Cotter who knew about our work with disadvantaged students in a slum area of Patong,” Roelien said.

“In 2005 we began the Scholarship Program to help students affected by the tsunami and the teams that arrived for the Rugby10s that same year brought donations that immediately benefited the program,” she added.

The efforts of Roelien and Pat were recognized in 2008 when they jointly received the “Spirit of Rugby” award for their contributions to the community through rugby.

“The majority of the financial support for the Program comes from teams and individuals that participate each year in the Phuket International Rugby 10s tournament. We are extremely grateful for all the support the local and International teams gave in the past and continue to give to the ACF Scholarship Program,” Roelien said.

One major boon for rugby fans on the island, is the waiver of entrance fees for spectators for the entire event.

In addition to the action on the field, players and their entourages will enjoy a range of social events including the now iconic “Tour Virgin Beauty Pageant”, held on the Saturday evening of the tournament.

Tournament updates will be available throughout the competition on Phuket Sports