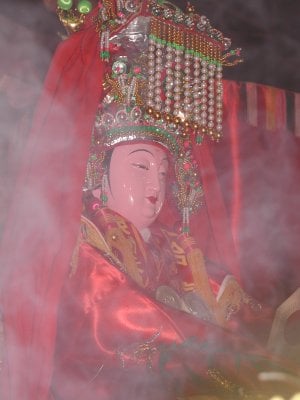 Mazhofu is a well-known Chinese deity originating on Meizhou Island in Fijian Province. Devotees believe that Mazhofu protects followers from the dangers of the sea. The deity has about six million followers in China, and there are also more than 1,000 Mazhofu shrines in Taiwan.

The Mazhofu replica was brought to Phuket in association with the Taiwan Taoism Association, and will stay on the island after the Vegetarian Festival in an as-yet-undisclosed location.

The statue arrived at Phuket International Airport on a 9:30 pm flight and was taken to Navamindra Memorial Square, where devotees lit joss sticks before paying respect to the deity.

K. Suwalai said that the image will be the main attraction of this year’s festival, from October 3 to 11.

Governor to promote Phuket in Japan