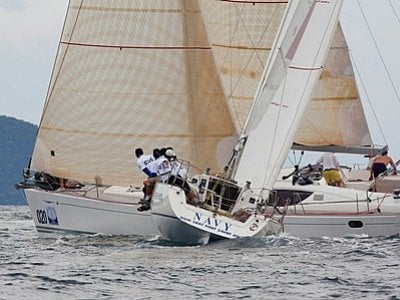 PHUKET: The third day of racing at the 2011 Phuket King’s Cup Regatta, hosted by Kata Group Resorts Thailand, set sail in the best weather conditions of the week so far, with winds up to 16 knots providing some exciting racing.

In the IRC 2 Class, it was Wiwat Poonpat skippering Royal Thai Navy 1 who triumphed with two wins to jump to the top of the leaderboard.

“With such a strong wind, we were always likely to do well,” said Wiwat. “Because of stronger winds expected in the two remaining days, we stand a good chance to win the title for the fifth time, even though there are five new crew members in the team.”

Singapore’s Bill Bremner of Foxy Lady5 solidified her second place in the series from Peter Dyer’s Team Kata Rocks in third, with only two days to go.

Meanwhile, the competition is also tense in the IRC 1 Class after six races. Yasuo Nanamori’s Karasu won race four and finished second in races five and six. They lead the standings on eight points ahead of David Ross’s Kukukerchu which won race five and holds onto second overall.

Hong Kong’s EFG Bank Mandrake, skippered by Nick Burns, is a point down in fourth place overall after three days, while three-time defending champion Matt Allen of Ichi Ban trails the series leader by 18 points, but is slowly making progress up the table.

In the IRC Zero Class, Hannes Waimer’s Team Premier strengthened their lead by winning two races and finishing fourth in another. The team have seven points in total, four better than Hong Kong’s Sam Chan. “I am really happy to lead and 75% confident we can win the title by the end of the week,” said Team Premier’s tactician, Gordon Maquire. “The only issue was a broken batten in the last race but we still managed to finish fourth.”

Hi Fi skipper Neil Pryde landed his first win in the 25th King’s Cup Regatta in race six. Sitting on 12 points in the series, Hi Fi is only one point behind Freefire.

Hong Kong’s Frank Pong, who has joined the event every year since 1998, and who despite taking line honours in all three races today, wound up with a best finish on corrected time in second place in race six.

In the Firefly 850 Sports class, Roger Kingdon’s Moto Inzi continued in great form by winning race four which was his fourth straight win in the series and followed that with two second places.

Arguably the best performance of the day was in the Multihull Class, where Alan Carwardine’s Sidewinder triumphed in all three races. Sharing top spot in the series, on 15 points, is Mick Coleman’s Da Vinci.

Defending champions, David Liddell’s Miss Saigon team, who led the series after two days, has slipped to third, four points behind the leader.

In Premier Class, Titania of Cowes, skippered by Richard Bobbs, remains the series leader with a first and second today, with five points overall. Peter Sorrenson’s Baby Tonga Strongbow is five points behind in the series, while the stunning 82-foot Swan, Chao Ren Plus One, skippered by Wang Bin, is holding third position overall.

In the Bareboat Charter Class, Sail Plane, skippered by Oliver Heer, continues to lead the series with nine points, two better than Mike Crisp’s Venture after four races. The Sail Plane team, which consists of 13 people from six countries, finished fourth in race three and improved with a second place in race four.

In the Modern Classic Class, Bo Sondergaard’s Patrice III leads the series after a first in today’s race, followed by Peter Wood’s Windstar in second and Kevin Gillow’s Poco in third overall.

In the Cruising Class, Rob William’s Odin remains the team to beat with a third straight win in the series and heads the leaderboard on three points, five ahead of American Jack Christensen skippering Linda, with William Sax’s Astraeus in third.