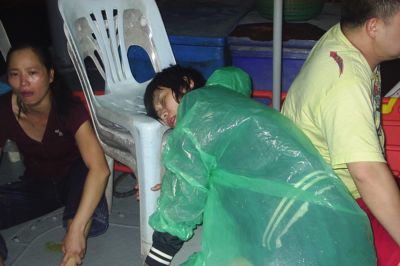 PHUKET: A ferry carrying 34 passengers and four crew sank yesterday afternoon, with all aboard left floating in the sea off Koh Phai until they were rescued by the Krabi Marine Police.

While awaiting rescue, all passengers and crew remained safe in the rough water as they all had time to don life jackets kept on board before abandoning the sinking vessel.

Gen Phuwadol said that his unit received a report about 4:30 pm that a boat had sunk. Police immediately alerted the Krabi Marine Police, which dispatched five rescue vessels.

Boats from the Krabi Marine Transport Department were also involved in the mission.

No people were seriously injured.

In a separate incident about 6 pm yesterday, Phuket Marine Police received a distress call from the speedboat Rungorawan 19 as it tried to shelter from strong waves off Koh Khiew, some 17 kilometers off Phuket.

Phuket Marine Police Inspector Pol Lt Col Prathueang Srilamontri said the caller reported that a passenger on board needed emergency treatment for a heart condition brought on by stress from the large waves.

The passenger was identified as Chinese tourist Mr Li Xu Ming, 39. He was sent to Vachira Phuket Hospital for treatment and later released.

Three nurses were taken out to the speedboat in police patrol boat 629, said Col Prathueang.

All 12 passengers were returned safely to Rassada Port about 10 pm.

The speedboat had been hired out of Rassada Port by 12 Chinese and four Thai tourists for a day trip to the Phi Phi Islands.