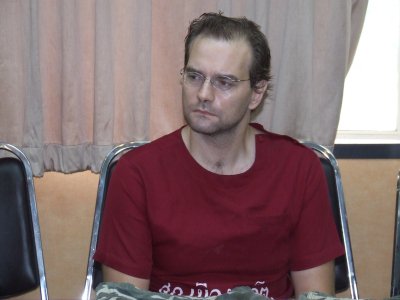 PHUKET: Ronald Fanelli, confessed killer of bar hostess Wanphen Pienjai, today blamed local media coverage for being partly responsible for his decision not to surrender himself to authorities before his arrest.

Mr Fanelli spoke to the Gazette briefly today from Phuket Prison, where he is being held for the stabbing murder of Ms Wanphen, a 33-year-old bar hostess at the Sweethearts bar in Kata at the time of her death.

Appearing healthy, Mr Fanelli said he was under instructions from his Thai lawyer not to divulge too much information about the case while it is still in the court system.

He maintains that the killing was a “horrible, horrible accident”, as stated in a July 19 press conference at Phuket City Police Station.

Mr Fanelli told the Gazette that he felt media coverage of the case unfairly portrayed him, but was factually accurate in most respects.

He denied reports that he mutilated the victim’s body apart from the two stab wound that killed her, however.

He had no way of knowing the real contents of a Thai-language confession statement he was advised to sign by his lawyer after his arrest, he said during a 10-minute interview.

Mr Fanelli is among some 1,200 prisoners currently detained in Phuket Prison.

Of these, there are more than 100 foreigners and about 30 farang, the Thai term used to describe Caucasians.