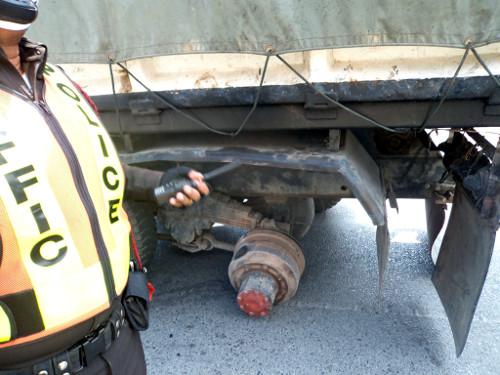 PHUKET: A Russian biker remains unconscious in Bangkok Hospital Phuket’s Intensive Care Unit (ICU) after being knocked from his motorbike by a rogue wheel that flew off a 10-wheeled truck on Thepakasatrri Road yesterday.

The Russian, named by police as Alexey Balabko, 26, was a riding a “big bike” when he was struck by one of two wheels that came loose off the southbound truck, transporting asphalt to Phuket Town, at about 2:25pm.

“Mr Balabko was knocked unconscious and both of his arms and one of his legs were broken,” Thalang Police Duty Officer Chatree Chuwichian told the Phuket Gazette.

Mr Balabko was taken immediately to Vachira Phuket Hospital, but was transferred to Bangkok Hospital Phuket’s ICU at about 9am today.

“His heart is still beating, but he isn’t responding to stimuli,” Lt Chatree explained this morning.

“The other wheel struck a pickup truck and continued at high speed until it hit the cashier counter of a roadside grocery shop set up in front of Sen Sgt Maj Mongkol Dechkoontot’s house,” Lt Chatree said.

The driver of the truck, Surachai Kladkaew, 36, was charged for reckless driving, as well as for causing an accident and damage, he added.

Police noted that truck’s wheels came off just about 200 meters from the spot where a tour bus recently lost a wheel, which rolled at high speed down the busy road and narrowly missed a traffic policeman (story here).